You are here: Home / NEWS / 2019 Elections Proved that I am Politically Smarter than Bukola Saraki- Oshiomole Incites 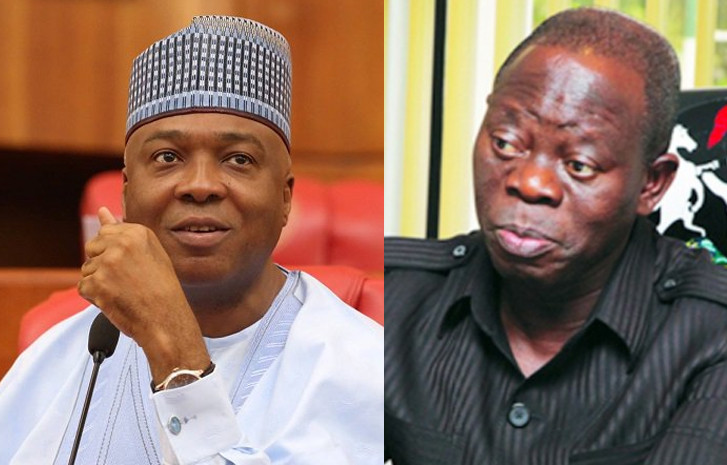 The APC National Chairman, Adams Oshiomole, insinuates that Bukola Saraki’s loss in the last general election has proven that he, Oshiomole, is politically smarter, than Saraki.

Oshiomhole stated this while fielding questions from state house correspondents after a meeting with President Buhari yesterday July 29th. The former Edo state governor said under his leadership as APC chairman, he successfully uprooted the former Senate President, Bukola Saraki and his cronies, politically, in Kwara.

”Remember I was saying that Saraki must be removed, people would say how would I do it? I said okay if he resists removal then we would uproot. We went to Kwara, we did OTOGE(Enough is Enough), we uprooted Saraki. You know who Saraki is? If you are talking of the smartest political player, seasoned smart guy, he is. But for every smartness he has, I have a superior smartness. At the end of the day who won?

“If you don’t, then I will be like lizard, I will praise myself if you State House correspondents don’t praise me”.

Oshiomole has earlier vowed to ensure the removal of Saraki as Senate President after the controversial election that saw him emerge as the leader of the senate was conducted in June 2015. Saraki who was not the APC’s favored candidate for the position of Senate President, later defected from the party to the PDP in August 2018.