You are here: Home / NEWS / #AFCON2019 will be my Last Tournament for Nigeria – Super Eagles Captain, Mikel Obi Reveals 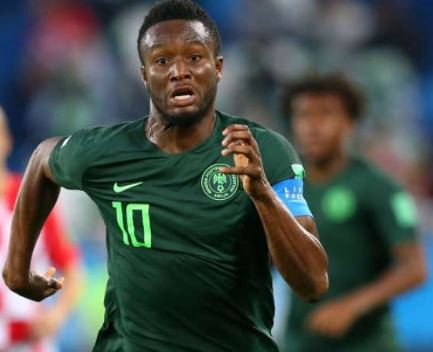 Super Eagles captain, Mikel Obi has promised to make his last Africa Cup of Nations one to remember for Nigeria and believes his presence in the squad could be a crucial factor in their bid for success.

“It’s been an amazing ride for me in the national team,” Mikel told BBC Sport.

“Obviously winning the Nations Cup in South Africa was the high point, that’s why I want to help this young team to hopefully achieve their dreams. Thirteen years I think is enough. I’ve won trophies, I’ve had a lot of amazing time.

I think it’s time for these young guys to carry on. I’m mostly here in Egypt to support the young guys and make sure they’re on the right track. I think my presence is always important for them, hopefully I can finish with the trophy.”

The 32-year-old midfielder has indeed been impressive. He has won a total of 89 caps for Nigeria, playing for them in the past two World Cups and helping the Super Eagles win the 2013 Africa Cup of Nations. He also helped Nigeria finish third at the 2006 and 2010 Nations Cups. He has made two appearances for his country at the ongoing tournament in Egypt, but missed their last-16 tie through injury as Nigeria secured a quarter-final date against South Africa with a 3-2 win over bitter rivals Cameroon.

Now Mikel is determined to play a part in Nigeria’s quest for a fourth continental title. “If I’m fit, I’d love to play in the quarterfinal, but no need to rush. Hopefully if we can make it to the semi-finals I’ll probably be ready then and help the team if I’m needed.  A finalist with the youth side at the under-20 World Cup in 2005, the former Chelsea player believes he has had a successful run for the West African nation.

Obviously winning the Nations Cup in South Africa was the high point, that’s why I want to help this young team to hopefully achieve their dreams. If we are able to win it here, I’ll be proud and they’ll be proud, then they can carry on from here” he added.

He was also one of Nigeria’s three over-age players as the African side won a bronze medal after defeating Honduras at the 2016 Olympics in Rio.