You are here: Home / NEWS / Aisha Pays Visit to Buhari in London 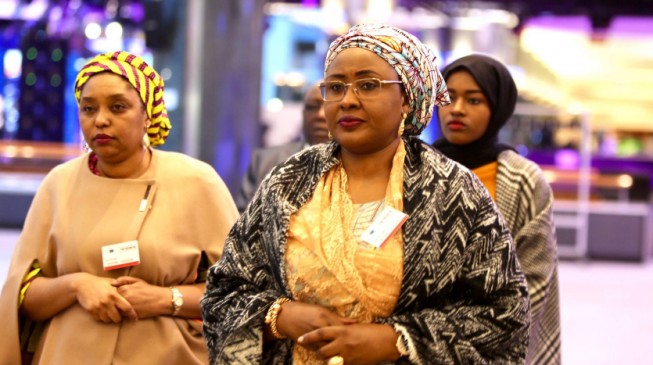 Aisha, Wife of President Muhammadu Buhari, is on her way to London to visit her husband who is on medical vacation.

According to a statement issued on Sunday, the president’s wife would stop over at Addis Ababa, Ethiopia, en route London.

“She is expected to stop over at Addis Ababa, to make a symbolic appearance at the meeting of the Organization of African First Ladies against HIV/AIDS (OAFLA) on Monday 3rd July 2017,” read the statement signed by Suleiman Haruna, director of information, office of the wife of the president

RELATED:   Politics: The US is charging 9 Iranians for hacking major American universities on behalf of the Iranian government

“She will continue her journey to the United Kingdom on Tuesday, 4th July 2017.

“She will convey to the President the best wishes of Nigerians and their fervent prayers for his quick recovery.”

Buhari departed the country on May 7, announcing that only his doctors could state when he would return.

His wife left for the UK three weeks later and returned to the country, saying her husband was recuperating very fast.

Six days later, an online platform reported that she was not granted access to her husband during the visit but the president’s wife did not confirm or deny the report.

There has been anxiety over Buhari’s absence, with some of his critics calling on him to resign.

RELATED:   Gospel singer, Sinach welcomes her first child at the age of 46 and after 5 years of marriage