You are here: Home / NEWS / Amber Guyger, the cop who shot her neighbour Botham Jean has been sentenced to 10 years in prison 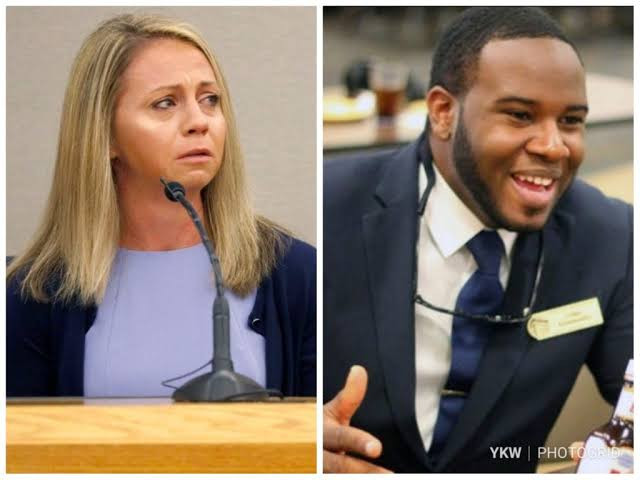 Amber Guyger, the Former Dallas police officer, has been sentenced to 10 years in jail for fatally shooting her unarmed neighbor after she claimed she mistakenly entered his apartment thinking it was hers and mistook him for a burglar.

This sentence of 10 years in prison was made on Wednesday, October 2.

The former cop learned her fate after a sentencing hearing that included emotional testimony from the family of the victim, Botham Jean, and revelations that she shared racist and offensive texts and social media posts.

Prosecutors had asked jurors to sentence Guyger to at least 28 years — symbolic because Jean would have turned 28 last Sunday.

The jury was allowed to consider whether Jean’s death was the result of “sudden passion,” which meant Guyger acted in the heat of the moment. It carried a lesser sentence of two to 20 years behind bars.

RELATED:   Is Kendall Jenner Trying to Get Pregnant? Read up to find out

Guyger is white and Jean was black, and his death resulted in protests which led to Guyger’s firing and renewed conversations about police use of force and racial bias.

Guyger, a five-year police veteran, lived one floor below Jean, 26, an accountant, in their apartment complex. She testified that she was off-duty but in uniform when she mistakenly entered his unit on Sept. 6, 2018, after a long shift at work, believed Jean was a burglar and shot him in the chest, saying she feared for her safety.

Jean was watching television and eating a bowl of vanilla ice cream in his living room just before 10 p.m. when Guyger burst inside, likely scaring him, prosecutors said at trial.

Texts were shown to jurors that reveal Guyger exchanged racist and offensive chats.

In texts between Guyger and her married work partner, Officer Martin Rivera, with whom she had been having an affair, she made racist remarks.

Rivera texted to Guyger in March 2018: “Damn I was at this area with 5 different black officers !!! Not racist but damn.”

She responded: “Not racist but just have a different way of working and it shows.”

Guyger texted with another officer last year about the Martin Luther King Jr. parade in Dallas.

“When does this end lol,” the officer wrote to Guyger.

Two days before Guyger fatally shot Jean, she texted with someone who had adopted a German Shepherd.

The dog’s owner wrote of the animal: “Although she may be racist.”

Guyger responded, “It’s okay … I’m the same,” and later added: “I hate everything and everyone but y’all.”

Jurors were also shown three Pinterest posts that Guyger had saved to her account and commented on. They included the picture of a military sniper with text that read: “Stay low, go fast; kill first, die last; one shot, one kill; no luck, all skill.”

In another Pinterest post, Guyger commented under a picture of a Minion from the movie “Despicable Me”: “People are so ungrateful. No one ever thanks me for having the patience not to kill them,” the comment read.

Guyger has the opportunity to appeal the conviction.