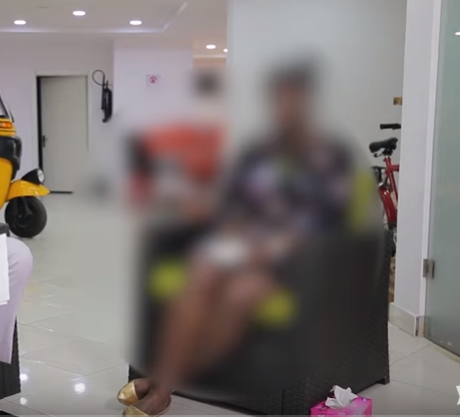 Another rape victim grants an interview against Pastor Biodun Fatoyinbo. She also revealed that COZA founder’s wife, Modele Fatoyinbo might be aware of her husband’s alleged sexcapades.

In the new video shared by YNaija, the anonymous lady who was given the tag ‘X’ revealed that she joined COZA church in Abuja in 2009, and the church’s only music team Avalanche offered her sanctuary at that time. She was a worker and was employed in the church.

X initially didn’t see the red flags because the opportunity was in line with her desire to do more within the church, and kept the bond she had made with Fatoyinbo’s children.  Before long, she was living abroad, in one of the cities where the Commonwealth of Zion Assembly (COZA) has branches across the world. Modele had done the job of hiring her but X’s position also required her to work closely with Pastor Biodun, who visited her city regularly to minister to his congregation there and spend time with his children who were schooling in the city.

She recollects, “I had known him, not only as a mentor but as a spiritual leader. I’ve heard him preach, I’ve heard him talk about God; and there I was, about to witness him do the complete opposite of what he stood for.”

She kept asking him to stop, appealing to his conscience as her spiritual father but he didn’t listen. He allegedly undid the buttons of her jeans and took off her trousers. It was a couch and there was space to wiggle, but she didn’t even think to grab anything she could use as a weapon. She was just too shocked to react, he had just put his hands into her underwear.

“Just relax.” He said, as he took off his trousers and forced her legs apart, convinced he had her subdued.  All through the period where he allegedly raped her, she tried to reconcile the person she called her spiritual father with the man on top of her.  After the alleged rape took place, he walked her to the door and sent her on her way, convinced she would not talk.

And she didn’t, she stayed silent and he returned to Nigeria and his Abuja congregation.The alleged rape happened in the last quarter of 2017, but she stayed on working within the church till July of the following year. According to her, the incident showed her how much power over her life she had relinquished to the Fatoyinbos. She was at the mercy of the church, dependent on them financially for her sustenance, shelter and community.

She further revealed that the alleged rape shook her faith, and forced her to reevaluate everything she knew about God and Pentecostal Christianity. The distance gave her time to process her circumstance and plan her exist strategy. X further revealed that Pastor Fatoyinbo called later to apologize to her after Busola Dakolo went public with her rape story. According to her, the COZA founder claimed that Busola Dakolo seduced her at the time of the incident. He also suggested financial compensation to ensure her silence.