You are here: Home / NEWS / Anthony Joshua has been training for a month with chubby fighters like Andy Ruiz – Joshua’s manager, Eddie Hearn reveals

What to know how Anthony Joshua is getting ready for his next fight? Find out here. Ahead of Anthony Joshua’s boxing rematch against Heavyweight WBA, WBO and IBF champion, Andy Ruiz Jr on December 6 in Saudi Arabia, Joshua’s manager/promoter, Eddie Hearn has revealed that the Nigerian/British fighter has been training with fighters that have the same chubby physique like Andy Ruiz.

RELATED:   Fans React to the Engagement of Justin Beiber and Hailey Baldwin, and someone is getting dragged! 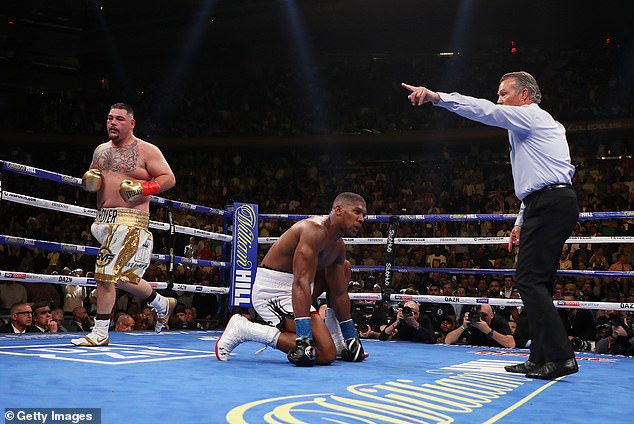 Andy Ruiz, a rotund fighter shocked the boxing world in June when he defeated Anthony Joshua in the 7th round during Joshua’s very first fight in the USA, and some boxing analysts believe Ruiz might win again in the rematch, but Hearn who has managed and promoted Joshua since 2012 believes the Brit will be better prepared this time around, as he faces the Mexican who gave him his first professional defeat.

‘A lot of early sparring now is replicating the style of Ruiz.”
Last time we had probably three weeks of sparring, and it was tough to find a guy like Ruiz, because there aren’t many like him.

RELATED:   Nipsey Hussle's music sales increase by 2,776% in the US after his death

‘Small, a little bit chubby, fast hands, and really good on the inside. Now we’ve replicated that, I feel like the preparation is going to be great.’