You are here: Home / NEWS / Ben Murray Bruce speaks on DSS takeover, vows to ensure Akpabio, his wife and children’s visas are revoked 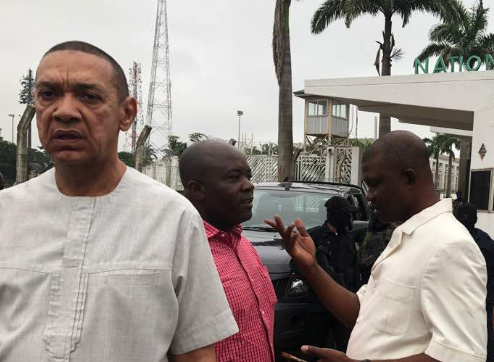 Senator Ben Murray Bruce is currently at the gate of the National Assembly where himself and his colleagues have been prevented to enter the complex by DSS.

Speaking to Channels TV, Ben Bruce said he has reached out to the US embassy and will reach out to other European countries to revoke the visas of Senator Godswill Akpabio and other leaders that orchestrated this seige.

RELATED:   Zlatan Ibrahimovi' announced his arrival at LA Galaxy with a brilliant full-page ad in the LA Times

”The back gate has been blocked and other gates opened for senators who are antidemocratic that is APC senators who will install Akpabio as senate president and impeach Saraki and Ekweremadu and so there is an opening at the back for those who are anti-democratic to come in but the forces are in front here Obviously, this is a regime change. We anticipated that this would happen.

More Senators arriving and also not allowed to enter the National Assembly. Sen Ben Bruce speaking on the invasion of National Assembly: “we are being invaded by state security.” pic.twitter.com/AZPgbM6nvA