You are here: Home / NEWS / BET apologises to Nicki Minaj for offensive tweet

BET has apologised to Nicki Minaj after they posted a tweet shading her following Cardi’s Grammy win.

In a since-deleted tweet, BET retweeted an article saying Cardi B is the first solo female rapper to win best rap album. The caption for the photo read: “Meanwhile, Nicki Minaj is being dragged by her lacefront.” 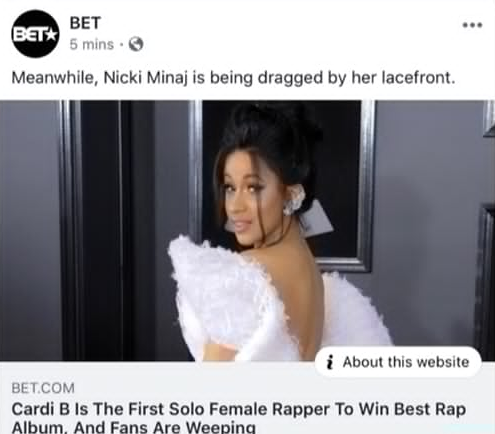 In the same light, Nicki pulled her BET Experience performance. She announced that she and her label, Young Money, would not be part of the BET Experience later this summer – which is a concert series she and Cardi were booked to co-headline just days before the BET Awards in June.

BET has now released a statement revealing the offensive post was unauthorized.

BET loves Nicki Minaj. We have supported her from the very beginning of her career and will continue to do so moving forward. Nicki has paved the way for so many performers and has solidified her place as one of the most powerful figures in the music industry.

Unfortunately the respect we have for Nicki was violated by this post that should never have been written. The post does not reflect how we feel about Nicki. And further does not reflect our company values. We deeply apologize for the hurt, disappointment and confusion that this post has caused. We are committed to doing everything we can to address the situation.

We are also conducting an internal audit to assure these types of posts are not published again.  We have apologized to Nicki and her team. The post has been removed and we have taken additional appropriate action. We understand Nicki’s position and look forward to continuing our dialogue with her. Finally, we apologize to all of her fans. This should have never happened.