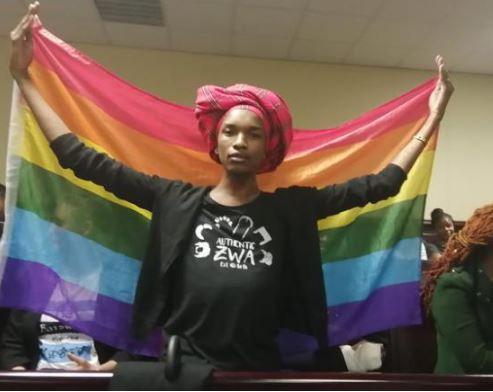 All eyes on Botswana as the country’s High Court has overturned a colonial-era law criminalizing consensual same-sex relations in a landmark victory for Africa’s LGBTQ movements.

Under section 164 of Botswana’s Penal Code, “carnal knowledge of any person against the order of nature,” was an offense that carried a maximum sentence of seven years imprisonment. Section 167 made “acts of gross indecency” whether in public or private a punishable offense, with up to two years in prison.

RELATED:   Buhari calls on Boko Haram to lay down arms as he receives Dapchi girls

The case was brought to court in March by Letsweletse Motshidiemang, a 21-year-old student at the University of Botswana, who argued that society had changed and that homosexuality was more widely accepted, local media reported.

The 2010 Employment Act made it illegal for employers to terminate contracts on the basis of sexual orientation, and two landmark rulings in October and December 2017 laid the foundation for trans people to more easily change their official gender on identity documents.

It is a historic win for LGBTQ activists and supporters in a country and region where homosexuality remains largely taboo. Out of 54 African countries, at least 32 of them have enacted laws making it illegal to have gay sex, according to the International Lesbian, Gay, Bisexual, Trans and Intersex Association (ILGA).

For some African countries, it is still an offence such as parts of Somalia, and in Sudan, it is punishable by death; in Mauritania, the death penalty is a possible punishment. In Tanzania, being convicted of having same-sex relations can result in life sentences while in Nigeria the Punishment is up to 10 – 14 years in prison.