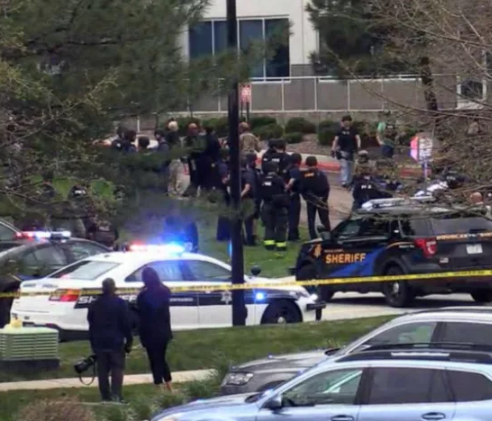 One adult man and one juvenile boy opened fired killing a student and injuring seven others in Highlands Ranch, Colorado, police said.

The suspects went on a rampage at STEM School Highlands Ranch  Tuesday afternoon. They took the life of an 18-year-old student before they were apprehended by a SWAT team and taken into custody.

Linda Ikeji reports that: Kelly Paulson, who lives near the attacked school where her son and daughter attend,  told KMGH that her son Christian was in study hall when he saw a “bunch of kids running out and saying, ‘school shooter, school shooter.’ ”

Kelly Rocco DeChalk, who also lives close to the school, told NBC News that he left his house and saw a boy who had been shot in the back, sitting by a mailbox at a nearby home.

He said: “I saw all of them running, so I thought it was a gym class at first. But then I saw there were so many of them.”

DeChalk said the wounded boy was with a teacher and a friend. He called 911 before taking them into his kitchen to wait.

The boy’s condition has not been reported, but area hospitals said two victims were in serious condition, two were listed as stable, one was said to be in good condition, and three were released, according to The New York Times.

RELATED:   Dapchi: How girl who refused to deny Jesus was held back by Boko Haram

The school that was attacked is an elementary, middle, and high school combined that teaches students aged 5 to 18. After the attack, parents were urged to pick their wards at the nearby recreational centre.

Police said hours after the gunfire began that they were “engaging a third suspect” with relation to the attack and the scene is still considered “unstable”. But a third arrest has not been announced.