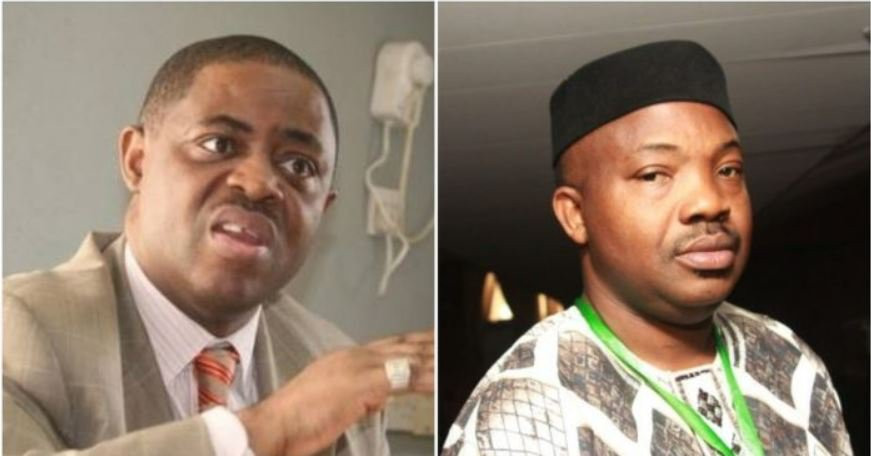 Justice John Tsoho gave the order today while delivering judgement in an ex parte application filed on behalf of FFK and Odumakin by their counsel, Chukwuma Machukwu-Ume (SAN).

Recall that the antigraft agency had threatened to sue FFK and Odumakin after they went on social media last week, to allege that the Abuja home of embattled Chief Justice of Nigeria CJN, Justice Walter Onnoghen, was being raided by men of the antigraft agency. It later turned out to be false. EFCC had in a statement, threatened to institute legal proceedings against the duo.

FFK and Odumakin however ran to the High court to stop the agency from arresting them.

At the hearing of their case on Monday morning, their counsel, Machukwu-Ume told the court that the three security agencies were planning to arrest and detain his clients over comments they made with regard to the travails of the Chief Justice of Nigeria, Justice Walter Onnoghen. Machukwu-Ume argued that his clients were only expressing their freedom of speech and that their lives are currently being threatened and as a result, both have gone into hiding.

“The spokesman of the EFCC, Mr Tony Orilede, was alleged to have made the threat to arrest them publicly at a conference where he represented the EFCC chairman. He said they are doing everything possible to arrest these two gentlemen just for speaking their minds. The EFCC is established to pursue corruption and not comments made by Nigerians, expressing themselves,” he said.

Machukwu-Ume told the court that the application was brought pursuant to Section 6 (6)(b) and Section 46 of the 1999 Constitution as well as Order 4 Rules 3 of the Fundamental Rights Procedure Rules. He urged the court to grant the order restraining the respondents from arresting and detaining his clients pending the determination of the application on notice.

RELATED:   Revealed! See how many people actually live with HIV/AIDS in Nigeria

After listening to Machukwu-Ume’s presentation, Justice Tsoho said he was satisfied that the applicants had made a case that their lives were being threatened. He thereafter adjourned the case to February 4th.

“I am satisfied that the applicants have made out a case for the court’s intervention.