President Muhammadu Buhari may have finally intervened into the looming crisis between the Senate and the Comptroller-General of Customs, Col Hameed Ibrahim Ali (retd).

The President was also said to have warned his appointees not to overheat the polity by creating avoidable friction between the Executive and the Legislature. This is even as Senate spokesman, Abdullahi Sabi, had told journalists, after plenary yesterday, that senators would not support any policy that would infringe on the welfare and security of Nigerians. Buhari’s intervention came against the backdrop of Col. Ali’s defiance to appear before the Senate and explain why the new duty policy on vehicles imported into the country through land borders should not be reversed. Sensing danger ahead of Ali’s planned refusal to appear before the Senate in Customs uniform today, President Buhari, it was learned, called for a meeting between Senate President, Dr Bukola Saraki and Speaker of the House of Representatives, Mr Yakubu Dogara, to discuss and resolve the impasse. 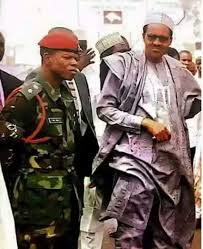 A source told Vanguard that President Buhari was particularly not comfortable with the language of some of his appointees and admonished that the face-off was not necessary. According to the source, President Buhari particularly told the Customs boss that whoever loves him will not at this point in time orchestrate any scuttle between the Executive and the Legislature. Ali rushes to Senate, meets with Saraki, Lawan Following the intervention of the President, Ali, yesterday rushed to the Senate to have discussions with Saraki. A source told Vanguard that the Customs boss arrived the office of the Senate leader, Senator Ahmad Lawan, at 5.30 p.m, and was, thereafter, ushered into the office of the Senate President at 6 p.m. According to the source, he was led to these offices by the Senior Special Assistant to the President on National Assembly ( Senate), Senator Ita Enang, and the Chairman, Senate Committee on Customs, Excise and Tariff, Senator Hope Uzodinma, PDP, Imo West. Col. Ali was said to have told the Senate president that he regretted not honouring the Senate’s invitation, citing bereavement.

RELATED:   See why the House of Representative have given CBN a one week ultimatum

The meeting at the Senate President’s office ended at 6.38 pm, while the Customs boss finally left at exactly 6.49, in company of Senator Enang and Senator Kabiru Ibrahim Gaya, APC, Kano South. It was not immediately clear what they discussed at the meeting but a source said the President’s intervention may prompt a reversal of the policy that had set the people against Nigeria Customs Service, NCS. Earlier at plenary, before the President’s intervention, the Senate had insisted that the Customs C-G appear today in uniform, and dismissed the letter written by him to ask for deferment, citing management meeting as excuse. Speaking with journalists later, after plenary, Senate spokesman, Abdullahi Sabi, said senators would not support any policy that would infringe on the welfare and security of Nigerians. He said:  “The subject matter for which we are summoning is not dire but critical to Nigerians. We stand by the Nigerian people. The primary purpose of government is the welfare and security of Nigerians. “Any policy that infringes on the welfare and security of Nigerians is not a policy. The Nigerian Customs is being run in a way that Nigerians will pay for their inefficiencies. “You have done everything to buy a vehicle to give comfort to your family and somebody comes and tells you this – where is your customs duty? This is why the Senate is not in support of the policy. It’s anti-people.

RELATED:   LOL! See what Dino Melaye wore to a conference in Switzerland everyone is insulting him for