You are here: Home / NEWS / Deployed father who hasn’t seen his son in 1 year surprised him during Taekwondo training and it’s very emotional 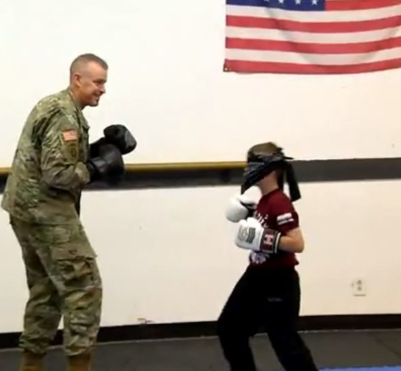 Emotional video as a deployed dad who hasn’t seen his son in 1 year decided to surprise him during Taekwondo training and the emotional video has gone viral.

In a video shared online, the boy is seen in a blindfold as he prepares for his next battle. Unknown to him, his father was the one he was to fight.

The father steps in and the fight begins. The young boy gives it his all until the man speaks and he stops in his tracks. He then continues fighting. The man spoke again and, this time, the boy stopped fighting and said, “Dad?”

When he took off his blindfold and saw that it was indeed his dad, he jumped straight into his arms and cried tears of joy. It’s hard to remain dry-eyed at this point.

Watch the beautiful reunion video below.

RELATED:   Wendy Williams Talks about her New Man, a doctor and also why she Dumped her 27-year-old boytoy