You are here: Home / NEWS / Do You Miss Hearing about Alicia Keys? Nothing to worry, She Keeps Us Updated as She Graces June’s Essence Cover The presence that the award-winning singer Alicia Keys brings to the cover star for Essence‘s June issue is indeed to the light.

One of the world’s favourite star talks new music, her upcoming autobiography on Oprah Winfrey’s publishing imprint, An Oprah Book, and growth in a sit down with Yes, Girl podcast hosts Cori Murray and Charli Penn.

As Bellanaija reports, here are excerpts below:

When She Realised She Was a Grown-ass Woman

The thing that comes to my mind is when I gave birth to Egypt, my first son. I went to visit my mama and my “auntie,” who has known my mother for a billion years. I was introducing her to the baby, and I’ll never forget the first thing she said to me: “Oh, you got your big-girl panties on now.” She was right. Prior to that moment, I would have definitely not had my big-girl panties on. I remember it was like a real transition. I was raised by my mother. She is a single mom and she’s a badass woman. She is so strong. I don’t even know how she’s as strong as she is, and I’m so proud of her. I’m proud of what she’s given to me, and she has always kept it 100 percent funky with me. She gave me a certain sense of groundedness that stuck with me my whole life.

What her current dreams are

First I want to be healthy. I want to be healthy, like for real, like spiritually healthy, emotionally healthy. I want my family to be healthy. I want it to be ingrained in all of us, our power and richness and potential. I really want that in the same way I want to feel fulfilled. Not because I have a lot of things or because something went the way I wished it would, but because I’m genuinely fulfilled. So that’s a big wish for me. I want to keep growing. I want to keep exploring the crevices and the places I haven’t yet. You’ve got to try things and see what they’re going to bring you, and one of the things I talk to my son a lot about is really like if the energy is not right, go away. Just because it’s someone you love or just because it’s someone you’re supposed to be cool with, like, if it’s not an inviting energy for you, don’t be there. 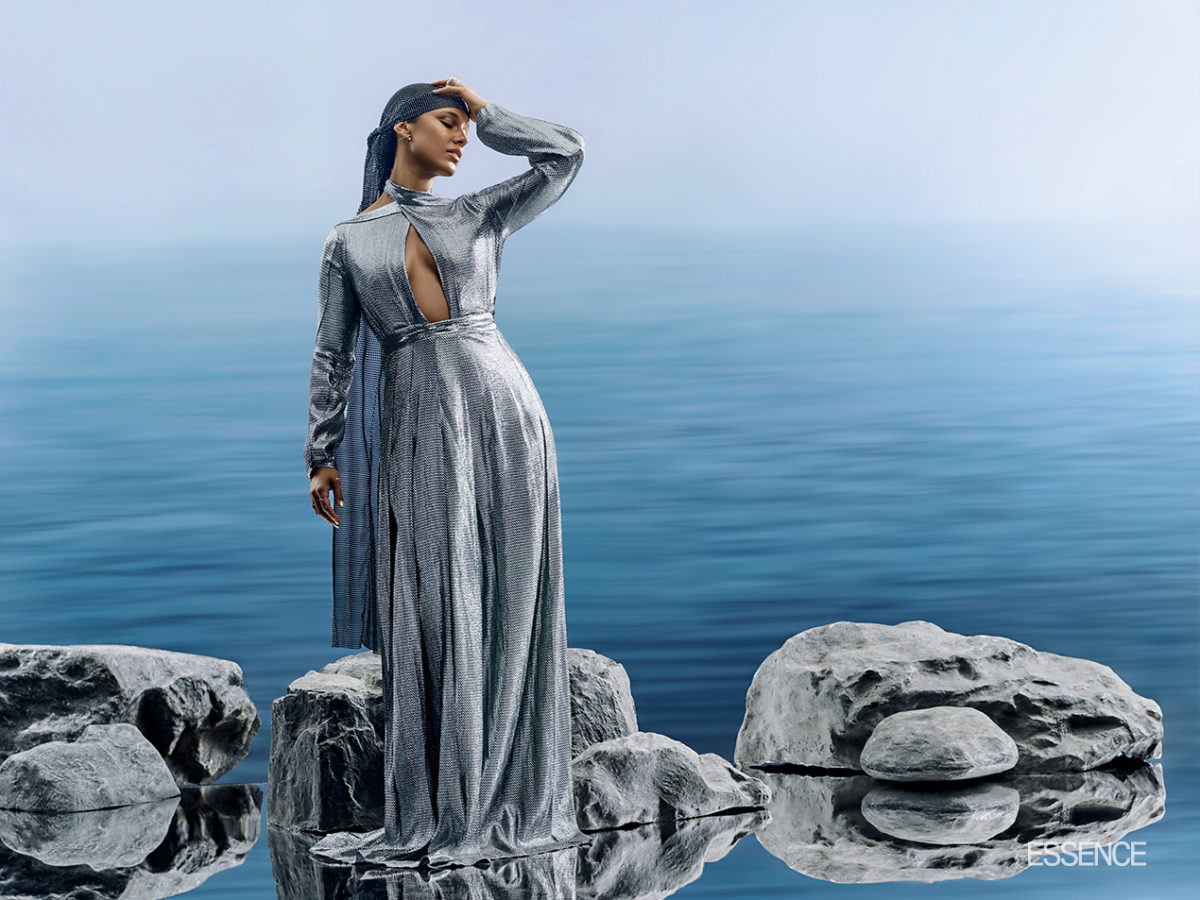 What Becoming a Wife and Mother Taught Her About Herself

Man, becoming a wife and a mother, specifically a mother, really taught me so much. I remember clearly wanting to remove the negative energy around me quickly, and prior to that, I didn’t feel so drawn to do that for myself. But doing it for this new soul made sense to me. And then that evolved into realizing that if it’s not really feeling like the right thing for me…if it’s not feeling really good, I’m not going to do that. I used to say yes to everything. I think I started to learn about boundaries for myself and creating space for myself and allowing there to be an ending. I started to understand the difference of, like, if it’s flowing, it’s flowing. If it’s not flowing, go back tomorrow. It’s okay. You don’t have to force it.

We are a beautiful blended family. I’m super proud of all of us. I think one of the things that we talk about a lot is just we’re so quick to find the negative in everything. We’re so quick to just latch on to it and hold on to it and never let it go, and it’s a really beautiful thing to see the opposite side of that and to witness it in a genuine way and experience it. I think we just don’t get to see enough of it, and there’s plenty of it. There are plenty of people who have new families and are then able to bring their entire families together. Whatever’s natural, you know? It’s just a natural vibe. You can get to know each other and actually create sisterhood, create understanding. I just don’t think we get to see it a lot, or at least it’s not featured, even in the media. You do something superpositive and the media’s not paying attention to that. It’s wild, wack. We are really proud of it. Our kids are flourishing. They’re beautiful. And it’s a constant process for us. We talk. We support one another. We build. Sometimes we’re like, “Man, what about this? Did you…How are you handling this? How are you handling that over there? Is that going like this?” You know? And we’re connecting, so it’s a beautiful thing.

RELATED:   Have You Ever Seen Drake Cry? Well He Did, And The Reason Is So Touching. Listen to the interview below: