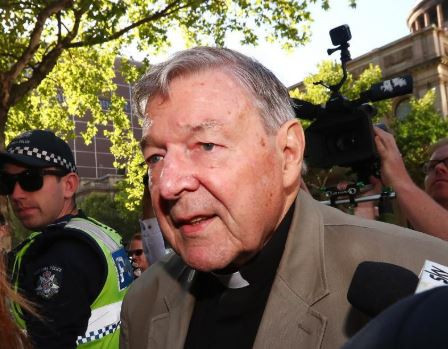 Cardinal George Pell, the most senior Vatican official to be convicted of sex abuse to date, has been sentenced to six years in prison for the “callous” assault of two choirboys in the late 1990s.

A former senior adviser to Pope Francis, Pell showed no reaction when Chief Judge Peter Kidd handed down his sentence in a hearing broadcast live worldwide on Wednesday from Victoria’s County Court in central Melbourne.

Pell, 77, was found guilty of one count of sexual penetration of a child and four counts of committing an indecent act with a child last December after a secret five-week trial.

Reporting of the trial and verdict was suppressed by the court to avoid prejudicing a second trial, which crown prosecutors abandoned in February after the judge ruled some prosecution evidence couldn’t be submitted.

On Wednesday, Judge Kidd said Pell’s attack on the victims was “breathtakingly arrogant” adding that the cardinal had assaulted the boys with “callous indifference to the victims’ distress.” But the judge said Pell was “not to be made a scapegoat for any failings or perceived failings of the Catholic Church.”

Outside the court, survivors of Catholic sex abuse who had attended the hearing were divided on the sentence. Some felt it was too light, while others were happy to see justice being done. “I would have been happy with one month, one week,” one said.

In a statement after the sentencing, the surviving victim said it was hard for him “to take comfort in this outcome. There is no rest for me,” he said through his lawyer, Vivian Waller. “I’m doing my best to hold myself and my family together.”