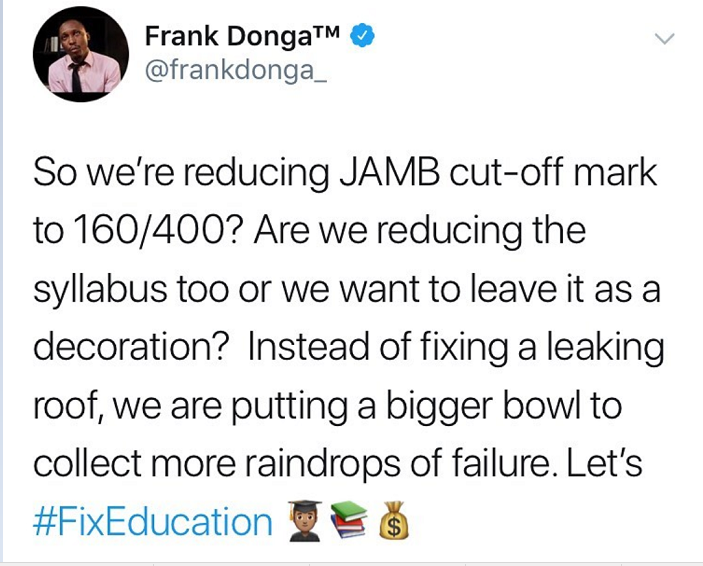 The 19th Policy Meeting on Admissions to Tertiary Institutions in Nigeria approved 160 and above as the national minimum cutoff mark for admission into state and federal Universities for the year 2019 yesterday. It brought to the light the plight infringing the educational system.

Like many Nigeria, Frank Donga, popular comedian, dropped his comedy stunts by facing squarely at the poor education the nation is faced with. In a hashtag, #FixEducation, he cries for things to be done properly.

RELATED:   'The problems are so enormous in Nigeria' President Buhari cries out

It was also agreed at a meeting held at Bola Babalakin Auditorium, Gbongan, Osun State, that the minimum UTME score for admission into private Universities should be 140.

RELATED:   Lawyers reveal the Judges arrest by DSS was an act of revenge (Read details)

Kunle Idowu wrote on Twitter: ‘So we’re reducing JAMB cut-off mark to 160/400? Are we reducing the syllabus too or we want to leave it as a decoration?  Instead of fixing a leaking roof, we are putting a bigger bowl to collect more raindrops of failure. Let’s #FixEducation.’