You are here: Home / NEWS / “If the death by hanging hate speech law was in place during Jonathan’s administration, do you think Lai Mohammed would be alive today?”- Senator Abaribe speaks 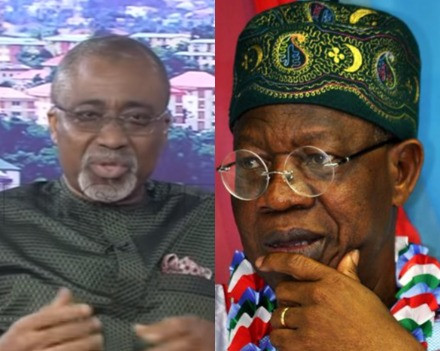 Senator Enyinnaya Abaribe has spoken against the death by hanging Hate Speech bill that has passed first reading in the Senate.

As reported on Channels TV, Senator Abaribe wondered if the Minister of Information and Culture, Lai Mohammed, would be alive if the law was enacted during the Goodluck Jonathan administration. According to Abaribe, Lai Mohammed said so many unprintable things about Jonathan when he was still President and Lai Mohammed’s right to express his opinion was not trampled upon.

When asked to comment on the controversial bill, Senate Abaribe responded

In forming my thoughts, I would want to read out some things for you just to put it in context.

These were the words of Lai Mohammed, the Minister of Information between 2012 and 2014. I bet you that anybody who says this today, they would say it is hate speech. They would say you have called the president incompetent and they will jail you. That is why when you say you have the need to circumscribe people’s rights, you should also remember the past. If a hate speech bill which advocates death by hanging was in place between 2012 and 2014 when Lai Mohammed was making these acerbic statements against the Jonathan administration, do you think he will be alive today?

The right to hold an opinion, make an opinion, is an inalienable right of every citizen of Nigeria and when somebody who used to use this, shows up today and now says no you can’t do it for what he did in the past, that tells you that it’s nothing but intolerance and driving us towards an authoritarian government and I am saying that every Nigerian should wake up to fact that they don’t mean well for us” he said