You are here: Home / ENTERTAINMENT / This is what Quilox night club had to say on Oritse Femi’s allegations against them (Read shocking details)

Only God knows who we are to believe in this story involving Oritse
Femi and a bouncer at Quilox. This is the second side of the story
after Oritse Femi’s management released their press statement
yesterday.
This is what Quilox had to say:

In the early hours of the 12th of November 2016, an unfortunate
incident occurred between music act Oritsefemi and a member of the
security team at Club Quilox.

The incident started at about 2am Saturday morning when Oritsefemi
came into Quilox without prior reservations or table bookings. It is
important to note that tables are allocated to customers who have made
prior paid table bookings in advance of their arrival except such
customer is a patron or member of the club and tables are allocated
according to availability in such case. However Oritsefemi who did not
fall into any of the categories above approached a patron and after
pleading was accommodated on patrons table, but with the understanding
that other guests of the said patron were still been expected to join
the table shortly which Oritsefemi agreed to. It is important to note
that this is a table that could only accommodate a maximum of six
people. 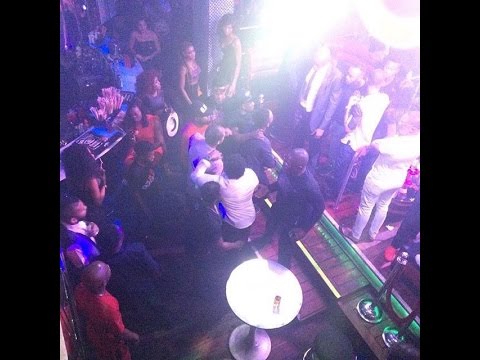 In a surprising turn of events, Oristsemi who was drinking from the
patrons bottle, threw caution to the wind by attempting to sit eight
of his guests at the table, the surprised Patron strongly rejected
such effrontery and invited the bouncer guarding the floor to
intervene .The bouncer politely approached Oritsefemi and told him
that the Patron who owned the table did not want any of Oritsefemi’s
guest joining in as the patrons guests were still being expected.
However Oristefemi in a fit of unprovoked rage slapped the bouncer
then proceeded to breaking a glass in his hand and stabing him in the
eye. Despite his position or the power he thinks he has as a
celebrity, this is not an excuse for inflicting grave bodily harm on
another human being.
The scene quickly became rowdy as other customers rushed to the table
and confronted the artist for his violent behavior, our security team
quickly stepped in to salvage the situation by carrying Oristefemi out
of the club (this is our standard procedure for violent altercations)
while other members of staff focused on giving First aid treatment to
the bouncer who almost lost his eye and had already lost so much
blood. Oristefemi faced by an enraged crowd outside and perhaps
realizing the gravity of his offense pretended to collapse. The artist
and the bouncer were subsequently rushed to a nearby hospital
The bouncer affected insisted on pressing charges as thus he and
Oritsefemi went from the hospital Bar Beach police station, where
Oritsefemi accepted his offense and pleaded for mercy, he was granted
bail at 12pm on the 13th of November and advised to report back to the
station on Tuesday 15th of November 2016.
We were hesitant to release a press statement as several well-meaning
people have attempted to intercede on behalf of the artist but after
his malicious and grossly false account of the events that occured, it
is only fair that we defend the integrity and ethos of our
organization

IMPORTANT POINTS TO NOTE ARE
– Quilox is the number one luxury lifestyle brand in Nigeria, all
areas of our establishment are premium as thus the allegation of
denying access of certain people to certain areas is completely
unfounded. this particular issue happened on a table of six at the
upstairs part of the club not in the entire VIP area.
– Quilox treats all our patrons with the utmost respect and dignity,
our professionalism and uncompromising customer service is what has
kept us at the peak for so long, the poorly worded statement by
Oritsefemi’s media team claiming our CEO made derogatory remarks
towards our loyal clientele(A list celebrities) is reasons best known
to him, because instead of taking responsibility for his actions, him
and his management are looking for artists support, and to what cause?
– Club Quilox did not press charges against the artist despite his
unruly behavior at our establishment, however the bouncer in question
has signified his intention to pursue his fundamental human rights due
to the grave bodily harm that befell him.
– The music industry veteran – Sound Sultan is a member of the Quilox
family and cousin to our CEO as thus it is impossible for him to be
treated in the manner Oritsefemi implied, as a matter of fact he was
one of those who quickly diffused the situation before it got out of
hand
– Club Quilox prides itself on the premium luxury lifestyle experience
we provide our patrons, we abhor violence and do not support or
condone any such acts on our premises.
– Oristefemi did not report ANY missing jewelry in his statement at
the Bar beach Police Station neither did he make any reports to the
management of Club Quilox
Attached are graphic pictures and a video of the bouncer Oritsefemi
assaulted and also a picture of Oritefemi at the hospital before he
was taken to the police station, with the said weapon included.
We thank our members and patrons for their unrelenting loyalty and
custom as we assure them of their continued safety and comfort at Club
Quilox