You are here: Home / NEWS / Aww… See the Man who was caught smuggling hard drugs in Lagos for the sake of Love

A trader based in Abuja and a commercial tricycle rider from Owerri were apprehended by officials of the National Drug Law Enforcement Agency (NDLEA) at the Murtala Muhammed International Airport (MMIA) in Lagos in connection with the unlawful importation of 6.390kg of substances that tested positive for heroin.

An Abuja based trader, King Sunday, who was recently arrested by NDLEA officials at the Muritala International Airport Lagos for transporting 2.490kg of heroin, says he ventured into the illicit business because he needed money to take his wife of four days to a lovely destination for their honeymoon. When interrogated, 38 year old Sunday who was arrested as he arrived Nigeria from Kenya, said

“I erroneously took the decision to smuggle drugs barely four days after my marriage. I was in need of money for my honeymoon and also for my business but I should not have involved myself in drug trafficking. My thinking was that I could smuggle the drug from Nairobi in two days without my wife knowing that I travelled out of the country. All my life, I have been upright in my transactions but this is a huge mistake and I regret my action.” 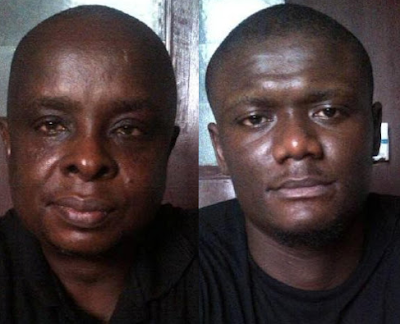 Also arrested by NDLEA officials is a commercial tricyclist in Owerri, the Imo State capital, Cajetan Chinedu Egwin. He was arrested on arrival from Kigali, Rwanda with 3.900kg of heroin . When interrogated, Chinedu said he needed the money to fix his Tricycle as well as settle his Landlord.

“The engine of my tricycle which is my only source of livelihood is bad. While I was looking for money to fix it, I was introduced to the man that promised to pay me N400,000 on the condition that I will bring his drug from Kigali. I accepted the offer because nobody was willing to help me. Apart from the repairs, my rent is due and my landlord has been asking for his money,” he said.

Both men would soon be charged to court for drug trafficking.

RELATED:   See the top 5 Nigerian Music Celebrities that have been affected badly by recession