The Officials of the National Drug Law Enforcement Agency (NDLEA) destroyed two thousand three hundred and seventeen bags of cannabis weighing 30,992kgs. That is a really huge number!
Sixty seven bags were also transferred to Osun State Command of the NDLEA as exhibits for further investigation. The cannabis will also serve as evidence against eleven suspected farmers arrested during operation inside cannabis plantation. 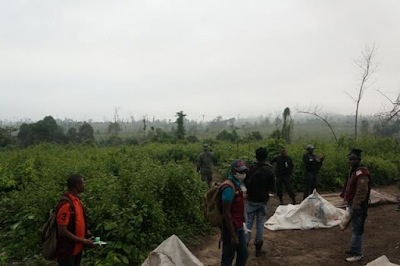 The exhibits with an estimated street value of three hundred and nine million naira (N309,000,000) were found in twenty Seven camps used as storage facilities located within a farmland at Orita-Ijebu forest reserve, Ikoyi area of Ikire in Ayedade LGA of Osun State. The Agency noted that drug cartels have invaded government forest reserves for the cultivation of cannabis.

According to the Chairman/Chief Executive, Col Muhammad Abdallah (retd) concerted efforts is needed to stop cannabis cultivation while farmers should be encouraged to cultivate food and economic crops. 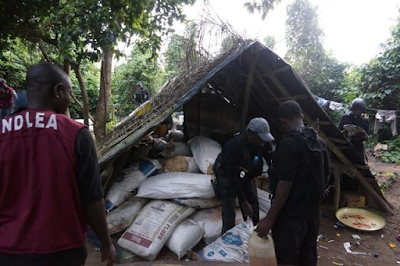 “Unless the current trend of cannabis cultivation is addressed, the country is on the verge of a devastating food insecurity. It is worrisome that the cartels are using government forest reserves in the cultivation of cannabis. Stakeholders must strategise on how to increase food production and prevent criminal organisations from diverting arable farmland for cannabis cultivation. A situation where food and cash crops is paving way for cannabis plant portend danger and deserve urgent attention”

The raid operation codenamed ‘Operation Herb Spring’ was in response to an intelligence received by the Agency on the activities of cannabis cultivators in the forest. Subsequently, the Chairman directed the Special Enforcement Team led by Mr Sunday Zirangey to coordinate the operation. 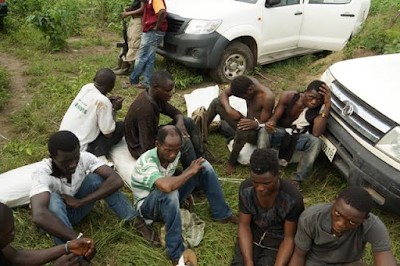 The suspects arrested in connection with the cannabis cultivation are Kofi Mensah, Godwin Monday,  Albert Williams Aniama, Enudi Liberty Onyeka and Peter Nelson. Others are Harrison Ewoka Francis,  Ossai Nelson, Sulaiman Niyi,  Dominic Tobechukwu, Mutiu Kolawole and Chucks Oghenekwu. Abdallah described the operation as a sweet victory for the NDLEA because the farmers had done all the work by harvesting and processing the cannabis awaiting evacuation from the farms.

“It was a perfect timing for the Agency and a painful loss to the drug barons. They had prepared the cannabis in bags waiting to shipment when we raided. The Agency will continue to launch similar devastating attacks on drug trafficking cartels until they are completely defeated” he said.

He recommended a review of laws relating to forest reserves, critical appraisal of the functions of forest guards as well as effective monitoring of the forests. All suspects will be arraigned in court soon.