You are here: Home / NEWS / Muslims storm location where Arabic inscriptions appear on Moringa tree in Ogun state to pray

Thousands of people have trooped into the residence of one Mr Micheal Ibironke in Ogun state after two trees appeared with the inscription of an Arabic word believed to be the name of Allah on it.

Mr Michael Ibironke, the occupant of the house where one of the trees was found, said what happened remains a mystery to him.

Ibironke, who said he has been living in the house for more than 17 years, said the Moringa trees were planted in 2014.

He told NAN that since the discovery, thousands of people of different faith have visited to see the trees, offer prayers and appreciate the work of God.

“On December 26, 2016, we celebrated Christmas party in my compound and did not discover anything.
But on the Jan. 2, while I was doing my morning exercise with my wife, she called my attention to it. My wife was the one that discovered it. 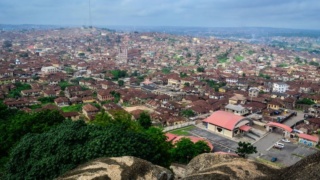 We are not a Muslim, so we called a Muslim brother (Mr Ajibade) to explain the strange thing. We also invited an Imam, who also confirmed it.

Over 10,000 people of different faith have visited my house since Jan. 2. On Thursday at about 12 noon, my son counted over 3,000 people. We are not complaining about the disturbance, because it will mean we do not value the work of God.

We are happy about it, people are greeting and praying for us.

“What happened has  not affected our faith as  Christian. People are celebrating and praising God.  It is a mystery to everyone.
“We have been receiving people from different places Mushin, Ifo, Owode-Yewa and even from Omu-Aran in Kwara.
“My house has become a tourist centre. What God revealed to us is that He is the greatest, no man is equal to Him and He can reveal Himself in anyway,” he said.

A pastor,  Olumide Olagbegi, also said that God was revealing to the people that  He is an Elvon God (He is only one).

RELATED:   "Rumour Has It": Ranti betrays Obi in episode 1 of web series [Watch]

He said it could mean so many things to a layman but believed God can come in so many ways.

A Muslim cleric, Imam Hamzat Oyeyemi,  told NAN that the sign was of God, adding it was a sign of goodness to the family and the people.

“It is a miracle. This Arabic word appeared in a Christian house, is a sign of goodness;  it is a mystery to mankind and people should be good.
“God has 99 names. The first is Allah, the name is from God, no one can share a name with God.

Micchael Dada, the owner of the second house where the Arabic word appeared said the tree was planted since 2010, but shows no sign of any misery until December 2016.

“There was a bush around the house, so I called some boys to help me clear it, it was in the process that the boys saw it.
“We first discovered it on the  Dec. 24, but paid no attention to it because we are Christians.
We can’t count the number of the people that had visited this tree since the beginning of 2017.
“We invited some Muslims, they told us the name of Allah was written on it, we are Christians so we do not  know the meaning.
“I don’t want to turn it to anything, anybody can come and pray as they believe, it is a mystery.
“We are not Muslim so we don’t know what to do,” he said.

A Cleric, Alhaji Muhammed said it was a natural thing which was said in the word of God that during the end time, He will show the people signs.

“It is in the Quran that if people refuse to worship the lord to His satisfaction, He will command stones to start serving Him which is part of what happened and people should change their ways.

Meanwhile, photographers and petty traders, especially those who sell sachet water and snacks, are trooping into the venue for business.