You are here: Home / NEWS / China invests $40 billion in Nigeria only after the ‘ONE CHINA POLICY’ agreement was signed

Yi, who is on a working visit to Nigeria, stated this at a bilateral meeting with his Nigerian counterpart, Geoffrey Onyeama, during which both countries signed the ‘ONE CHINA POLICY’ agreement.

The minister said China had already invested up to $45 billion in the Nigerian economy.

The Chinese foreign minister said that among the five-point proposal discussed, most important was the need to uphold the One China principle to cement bilateral relations of both countries. He also stressed that China and Nigeria are strategic partners committed to strengthening the longstanding friendship and cooperation between the two countries to the benefit of their people, The leadership reports.

According to him, the purpose of his visit to Nigeria was to implement the important agreements and cooperation reached between the Chinese and Nigerian presidents and also to help work closely with Nigeria to ensure that the outcomes of the Forum for China-Africa Cooperation Summit are well implemented in Nigeria.

“The level of cooperation with China is extremely high and the Chinese government is investing a large amount of money in Nigeria. 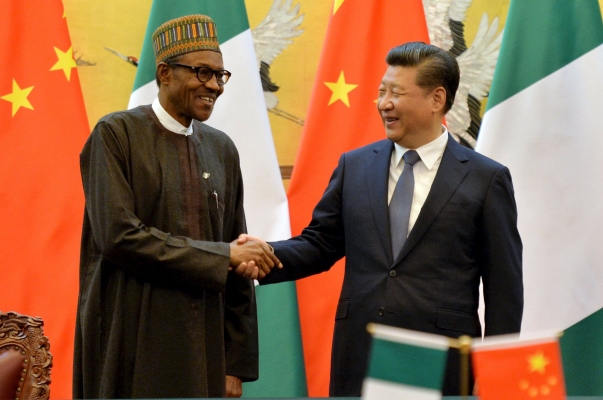 “In China we have already financed a total number of $22 billion on projects in Nigeria, and $33 billion projects are ongoing. We are also following up on another $40 billion investment in the pipeline,” Yi said, pointing out that the cooperation between both countries still has large potentials to be tapped.

He also emphasised that for both countries to achieve prosperity, there is the need to strengthen political and mutual trust and to further expand practical cooperation and strengthen the partnership currently enjoyed.

“I am confident my visit will surely be a successful one, and will play a role in further strengthening of strategic partnership between Nigeria and China,” the Chinese foreign minister emphasised.

Onyeama, mentioned China’s contribution in transport and infrastructure and bilateral cooperation in the areas of energy and agriculture, as well as scholarships in the educational sector among others.

He further stated that in security, Nigeria will cooperate with China in the provision of military hardware for the navy and army, as well as the sharing of intelligence.

Onyeama added that the federal government does not want to leave China in doubt of its support of the ‘One China Policy’.

The minister had earlier praised the existing relationship between Nigeria and China which, he said, had been strong for many years.

“I think the level of cooperation with China is extremely high and Chinese government is investing some amount of money in Nigeria and probably it is going up to $60 to $80 billion and we are extremely happy for that,” he said.

Onyeama said that at the last meeting in South Africa, the government of China made available $60 billon for Africa and a number of countries including Nigeria.

The minister said that he would want to key in and see how much of that could be used to assist in the various projects that we have in this country.

He explained that President Muhammadu Buhari was in China in 2016 and held a discussion with the Chinese government on various cooperation matters.

“We know that in the area of infrastructure, which is one of the priority areas, and the diversification programme of this government from oil, the Chinese government has been showing a lot of cooperation with us in this area, especially in the area of transportation,” he said

Both countries, at the end of the bilateral meeting, yesterday, released a joint statement elaborating that the government of the Peoples Republic of China is the sole legal government representing the whole of China, and Taiwan is an inalienable part of China’s territory.

The statement further noted that, “Government of the Federal Republic of Nigeria, reiterates not to have any official relations or engage in any official contacts with Taiwan, and supports all efforts made by the Chinese Government to realise national reunification.”