You are here: Home / NEWS / Dangote Group owns the largest truck fleet in Africa with over 10, 000 trucks, See what they plan to do with them

The richest man in Africa and foremost entrepreneur, Aliko Dangote, is setting up a $100 million vehicle assembly plant in Lagos, to tap the opportunity provided by the scarcity of forex and help tackle employment crisis in the country. So is it safe to now call Nigeria The Federal Republic of Dangote? LOL

The plant will be producing heavy duty trucks on which his conglomerate, the Dangote Group spends huge amount to import for distribution of its products both locally and across the continent.

Chief Corporate Communication Officer of Dangote Group, Mr. Anthony Chiejina confirmed the project, saying Dangote would be partnering a leading Chinese Company, National Heavy Duty Truck Group Company Limited, SINOTRUK to produce several thousands of trucks used mainly for haulage from its newly promoted assembly plant at Ikeja, Lagos. It was gathered that the decision to go into the truck assembly plant project was informed by the need to conserve forex in view of the current economic recession in the country. 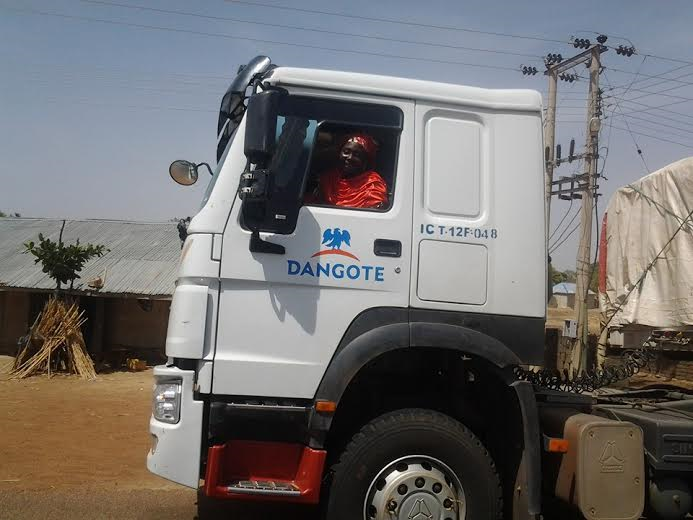 The multi-million dollars deal expected to have an assembly plant that would produce 10,000 trucks annually was signed in May 2014 in China, making it the eighth of Shandong, China (SINOTRUK), to be built abroad. According to source, the plant is 60 per cent owned by Dangote Group, trading under Dangote Industries Limited, leaving SINOTRUK with the remaining 40 per cent equity stake. Consequently, Dangote Agro Sacks Limited, which occupied the Oba-Akran Ogba premises of the former Nigerian Textile Mills, until recently, has been relocated closer to the group’s major operational hub, in Obajana, Kogi State and Ibeshe, Ogun State.

RELATED:   Deepa Iyer: Courts were unfair to boy who brought clock to school

The assembly plant is expected to generate employment for an estimated 3,000 workers, when fully operational. Nigeria remains one of the most important markets for SINOTRUK, with Dangote Group operates the largest truck fleet in Africa with over 10, 000 trucks using them for the distribution of its products, like cement, sugar, flour and pasta, among others, even in its plants across the continent. According to  Chiejina, the project had taken off and that when fully operational, the nation would be spared the huge forex spent in the importation of the heavy duty vehicles.

He said there would be room for the expansion of the project in future to meet the national truck demand and possibly export to neighbouring countries to generate foreign exchange for the nation. Chiejina said Dangote has always believed that the current economic challenges when approached positively will make Nigeria stronger at the end of the day, pointing out that “Alhaji Aliko Dangote still believes that Nigeria is one of the best places in the world to do business.”

RELATED:   Ivanka Trump announces she is shutting down her fashion brand to "focus on her work in Washington"

The automobile assembly plant is also coming ahead of another landmark project, a $17 billion, 650,000 barrels per day capacity Dangote Refinery, petrochemical and fertilizer plants located in Lagos expected, to begin operations in the next two years and creating over 300,000 direct and indirect jobs by first quarter of 2019, which would require a lot of long trucks for product distribution.