You are here: Home / POLITICS / ” I didn’t need to speak with him to validate the fact that Buhari was alive” Femi Adesina

President Buhari’s media aide, Femi Adesina, shared details of a phone call he had earlier today with the Nigerian President, who is in the United Kingdom on medical vacation.

Femi revealed that during the phone call, Buhari thanked him for holding out against mischief makers.

“AND PRESIDENT BUHARI CALLED AT 2:43 P.M
At exactly 2.43 p.m today, Saturday, February 25, 2017, my phone rang. Who was at the other end? Tunde Sabiu, personal assistant to President Muhammadu Buhari.
“Hold on for Mr President,” Tunde said.
And in a matter of seconds, the very familiar voice came:
“Femi, how are you?” (He calls me Adesina most times, but today, he opted for Femi)
I screamed :”Mr President, I have missed you. How are you sir?”
He first laughed. That familiar laugh. Then he said: “I am still resting. Thank you for holding out against mischief makers.”
I said it was my duty, the very least I could do, adding how happy I was to speak with him.
“How is your family?”
I said we were fine, and he asked me to extend his greetings to them.
“I hope to call you again, ” Mr President said, and I bade him farewell, adding: “Best wishes, sir.”
It was a defining moment for me. For more than a month, I had always spoken with aides who are with the President in London. Not once did I ask them to take the phone to him, deliberately so, because I didn’t need to speak with him to validate the fact that he was alive. And since he was on vacation, he had a right to his privacy.
Of his own volition, President Buhari spoke with me. It made my day. Even if he hadn’t done so, he would have remained my President, my leader, and my man. Any day.”

RELATED:   Jubrin Series: You won't believe what happened to the Suspended Rep member in London 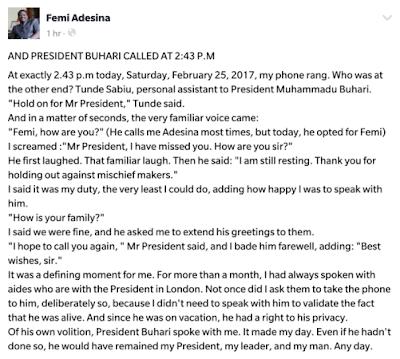