You are here: Home / NEWS / The wives of Calabar Man U fans makes new shocking confession

The wives of Calabar Man U fans makes new shocking confession. As  Nigerians continue to mourn the shocking demise of football fans who were electrocuted at a football match viewing centre at Nyaghassang Community, Calabar Municipality of Cross River State, two women have lamented that they did everything to prevent their husbands from going to the viewing centre on the ill-fated day.

The men had, on Thursday night while watching the return leg match between Manchester United and Anderlecht in the UEFA Europa league, lost their lives.

One of the women, Mrs. Elizabeth Alex Samuel, a mother of a year-old child, who is now a widow as a result of the incident said, if her late husband, Mr. Samuel, had taken to her constant advice, and warning, perhaps he wouldn’t have died at the viewing centre that fateful night.

The woman, who was in a sober mood when she narrated her ordeal, said after the incident happened,
her husband was among those evacuated to the hospital, but she learnt the following day that he was among those who died.

Narrating her ordeal, ThisDay reports Mrs. Samuel who was carrying her child said, 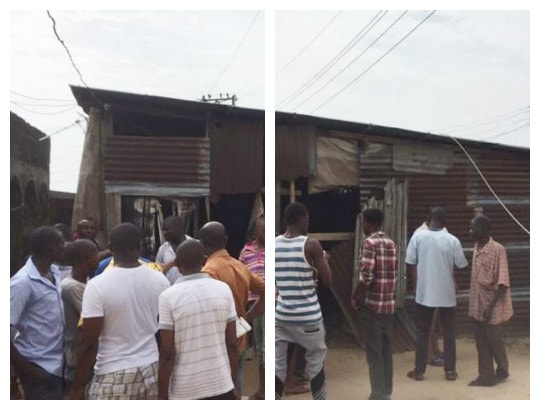 “Every day I warned him not to watch football in that viewing centre. That night, he went to watch football. The next thing I heard shouting and they said people have died. I was waiting I did not see him. I heard they had rushed him to the hospital. I was crying throughout. It was yesterday (Friday) they came and told me that my husband was dead”.

On a similar note, another woman who gave her name as Mary Okon said her husband, Mr. Emmanuel Okon, lost his life to the incident. Mary said she tried to stop her late husband from going to the viewing centre that night because she wanted him to eat, and stay at home with the family.

She said her late husband, who was a Manchester United fan, left to watch the match despite her asking him to stay back, and eat the food she was preparing.

“I was boiling rice for him and then he decided to go and watch the match. I told him to stay back and eat but he said I should come and meet him when it was ready. When the incident happened I went there to look for him and when I found him he was not moving. There were bodies lying on the floor everywhere. I carried him with the help of his nephew, but he was not responding. His body was cold. With the help of a neighbour who is a taxi man, we carried him to the hospital where we were told he was dead,” she said, while sobbing.

“That evening, me and my uncle were just joking about the match. He is a Man U fan and I am a Chelsea fan. So, we were playfully arguing, and I told him Man U will lose. He said no way that they would win. So, when it was time for the match, he called me to go with him and watch, but I felt somehow and decided not to go.

“Normally, I would have been there to watch the game, but I suddenly did not feel too well. People were even surprised that I did not go to watch. It was while we were at home that we heard the noise, and we went out; and I got there and saw my uncle dead. My uncle was a very loving and kind person. He was the one who was taking care of me. My school fees, accommodation, feeding, clothes, everything. I don’t know what I would do now that he is gone. Who would come to our help?”, he lamented.

Meanwhile, the Speaker of the House of Representatives, Hon. Yakubu Dogara yesterday called for investigation into the unfortunate incident which led to the death of football fans in the Calabar viewing centre.

Dogara, who expressed sadness over the development, however, condoled with the families of those who lost their lives as well as those who survived the incident, and the people and government of the state.

The police had confirmed that no fewer than seven persons watching the Europa League match between Manchester United and Anderlecht football clubs died by electrocution on Thursday.