You are here: Home / Ramadan / Six hurt as car ploughs into families celebrating the end of Ramadan 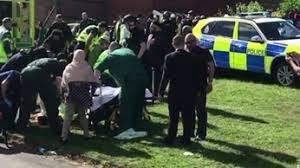 Six people, including three children, were injured today when a car climbed a kerb then ploughed into a crowd of people gathered outside Westgate Sports Centre where an event was taking place to celebrate the end of Ramadan.

This incident, which is the latest in a series of such that has recently been taking place in the UK, left two children in intensive care and one adult seriously injured.

The remaining injured are believed to have serious but non-life threatening injuries, officers said. 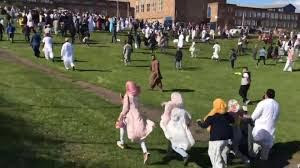 Though most of those present  at the scene were Muslims, prompting speculations that it might be a hate crime, Northumbria Police said the incident was not believed to be terrorism-related as the suspect had been celebrating Eid with her family and hundreds of others.  The suspect arrested is  a 42-year-old woman and she is presently in custody. No one else was sought in relation to the crime.

One eyewitness said: “From what I understand, (a woman who had been at prayer) was about to leave in her car and I believe she lost control. I ran up straight away because everyone was moving in on all the injured, trying to put water in their mouths. The parents of the kids were there. I had to sort of try and calm them down just to tell them the ambulance is there and they will take care of it; they know what they’re doing.” 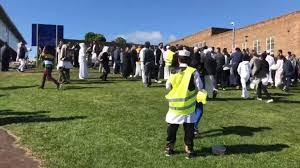 Emergency services arrived immediately following the accident, including six ambulances, two paramedic rapid response vehicles and the air ambulance. In a statement, the nearby Newcastle Central Mosque prayed for the recovery of those affected.

RELATED:   Ramadan | These are foods you should eat and food you should avoid

The statement read: “We pray and hope that all those affected recover soon fully. We thank the emergency medical services, the police and over 100 volunteers from the mosque for their quick response to the incident. We urge everyone to please pray for all those affected.”

Chi Onwurah, Labour MP for Newcastle Central, who is of Nigerian descent, tweeted: “So sad, I was at the prayers earlier & there were so much joy & unity. Thinking of those affected by what I am told was terrible accident.” 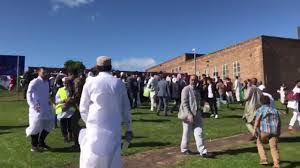 Ahmad Ali, a medical student who was present at the scene, described how the accident unfolded.

RELATED:   Ramadan | What happens to the personal hygiene of Muslims during fasting period

He said: “We were here for Eid. Everyone had just finished praying. The imam had finished his speech and everyone was talking to their families and getting some food. Then we heard a commotion and screaming. I ran up to the hill. A man got out of the passenger side. He seemed distraught. Someone was trapped under the car and then everyone just pushed the car so they were free. They were two children there, one of them – he was a boy about eight – was really badly injured. There were about five doctors there so he had a lot of medical attention. We checked to see he had a pulse. Everyone locked arms so there was a ring of locked arms around the injured people so they had space and the ambulances could get to them. Everyone was distraught. I am very grateful it’s not an attack. It’s very shocking to see a child injured like that. We are all hoping that he is fine, I just want to hear that.”

RELATED:   You must do these 11 things before breaking your fast this Ramadan season.

Abdul Mahdoul, who was at the event, told BBC: “We were wishing everyone happy Eid and suddenly we heard a lot of shouting and screaming. We didn’t know what it was. People were panicking. The police did a great job to calm the situation down. It was a very happy atmosphere beforehand, but afterwards just chaos. I just wish for the people to recover very quickly.”

Councillor Dipu Ahad said: “I hope there are no fatalities and my thoughts are with their families and other members who have been affected. We saw people crying and sobbing, it was like what you see in a horror movie, people were crying on the street, in corners. It was a real sad situation to see this and I think people were in confusion about what really happened. I had tears in my own eyes – it was a day of celebration for Muslims and others as well and it’s a very sad situation and I hope this never happens again.”