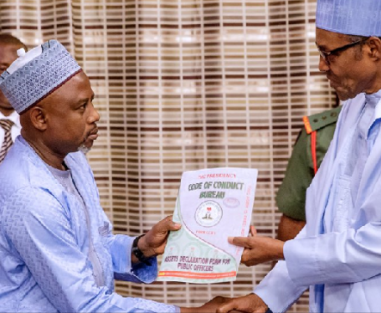 The Code of Conduct Bureau (CCB) has revealed that it cannot disclose the details of President Buhari’s assets declaration form submitted before the February 23rd presidential election.

In response to a request by the  Socio-Economic Rights and Accountability Project (SERAP) for the disclosure of assets declaration submitted by successive presidents and governors from 1999 till date, the Bureau reinstated their declarations. SERAP in its letter of request, asked the Bureau to make public “details of declarations made immediately after taking offices and thereafter, and for those who have left public offices, at the end of their term of office.” The group based its request on the Freedom of Information law enacted by former President Goodluck Jonathan.

SERAP in its letter also asked the CCB to make public, “information on the number of asset declarations so far verified by the CCB and the number of those declarations found to be false and deemed to be in breach of the Code of Conduct for Public Officers, by the Bureau.”

The Bureau however in a response letter signed by Musa Usman, on behalf of CCB chairman, said SERAP’s request falls short of the requirement of the law as it is only the National Assembly that can ask for such details from them. The CCB response in part reads

“Assuming the freedom of information Act is the term and condition, Sections 12(1)(v) and 14(1)(b) of the Act makes information in the asset declaration form private and producing such information would be an invasion of privacy of presidents and governors. Section 14(2)(3) of the same Act stipulate conditions for granting requests for private information but these have not been met by SERAP’s application.

“Consequently, I am further directed to convey to you that the request in SERAP’s application for information on details of asset declarations by presidents and state governors since the return of democracy in 1999 is hereby denied on the grounds that it falls short of the requirement of the law. Please accept the assurances of the highest esteem of the Chairman CCB.” he said

However, SERAP says it will be challenging CCB’s decision in court.