Barrister Chukwuemeka Ugwuonye, a conveyer of Due Process Advocates, DPA, who gave an update on the story on his Facebook page, gave her name as Jane Emoka. 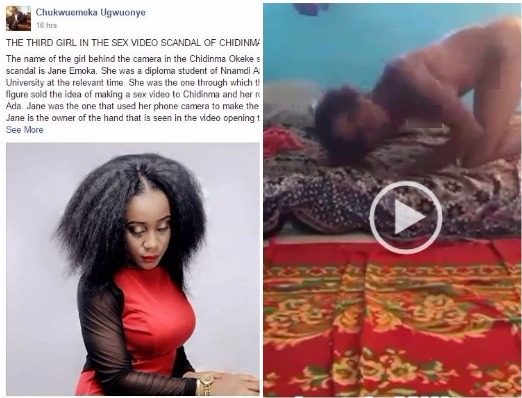 The then viral video which showed Ms. Okeke in a lesbian act with Ada, her close friend and personal.

It would be recalled that in the said video a third person, whose face did not appear in the video, was behind the camera and her hand was seen parting Ms. Okeke’s legs. That third person is Jane Emoka, a diploma student of Nnamdi Azikiwe University at the time, Ugwuonye stated.

RELATED:   Daddy Freeze again! See what he posted about MMM

“The name of the girl behind the camera in the Chidinma Okeke sex video scandal is Jane Emoka and she is also a beauty queen.

“She was a diploma student of Nnamdi Azikiwe University at the relevant time. She was the one through which the principal figure sold the idea of making a sex video to Chidinma and her roommate, Ada.

“Jane was the one that used her phone camera to make the video. Jane is the owner of the hand that is seen in the video opening the girls’ legs.

“She also participated in the sex act. However, she was edited out of the video before it was uploaded on the internet. Why was she edited out? We know the answer to that. The original video was edited at the ABS media studio.

Well Fast forward to today 5/16/2017 The lesbian video of Ms Jane has just been sent to us according to our source, GossipMillNigeria said

REMEMBER THE GIRL BEHIND THE CUCUMBER LESBIAN VIDEO? THIS IS HER OWN LEAKED SEX VIDEOS. HER NAME IS QUEEN JANE EMOKA. SHE WAS THE PERSON THAT RECORDED THE MISS ANAMBRA 2015 SEX VIDEO. SHE IS FROM ENUGU- UKWU IN NJIKOKA L.G.A OF ANAMBRA STATE, SAME TOWN WITH UCHE NWORAH THE ABS MD. SHE WAS ALSO THE MISS ANAMBRA HERITAGE 2015. A STUDENT OF UNIZIK.

RELATED:   Oh mine! Check out this cute picture of a family with nine kids