You are here: Home / NEWS / Jeff Bezos and his wife MacKenzie are divorcing after 25 years

Amazon CEO Jeff Bezos and his wife MacKenzie are divorcing.

Bezos, 54, made this announcement on Twitter. He said he and his wife had been through a trial separation and have now decided to end their 25-year marriage.

Bezos said the divorce is amicable and they are grateful for the years they have been married to each other. He said they will remain a family and stay “cherished friends”.

RELATED:   Titanic II Will Set Sail in 2022 Following the Same Route as the Original

He also adds: “If we had known we would separate after 25 years, we would do it all again.”

Jeff Bezos is the richest man in the world. He and McKenzie own a total of 400,000 acres of property, making them 2 of the biggest landholders in the country. They have 4 children together.

RELATED:   Dapchi girl, Leah Sharibu, will be released later to prove that President Buhari is not a bigot and lover of Christians'' Lere Olayinka

The couple got married in 1993 long before Bezos became rich. He actually became a millionaire in 1997.  They live in Washington, which is a community property state.  That means any assets accrued during the marriage are split 50/50, unless there’s a prenup.

RELATED:   Peeling Skin: Here are the possible causes and home remedies for this condition

Amazon is now the most valuable company on the planet … worth nearly $810 BILLION! 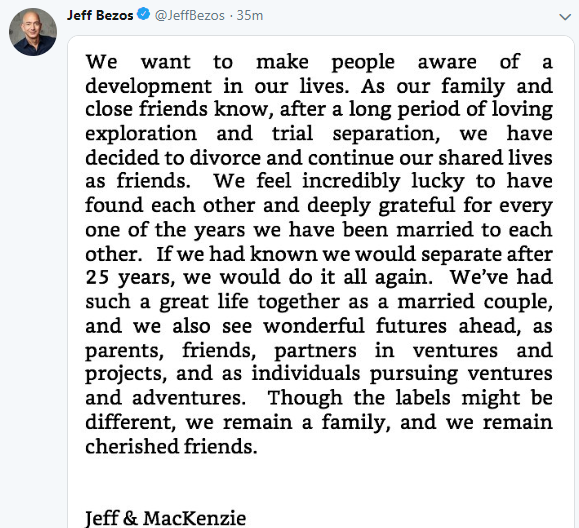