You are here: Home / NEWS / Kim Kardashian defends Kanye West after he reacted to the R. Kelly’s scandal by saying it’s ok to still enjoy his music

During a Sunday service event on Jan. 13, Kanye West led a choir as he rapped through a number of his songs from every era. From ‘College Dropout’ to ‘Ye’, the rapper performed as many tracks as he could with the help of a full choir.

During the service livestreamed by Kris Jenner, Kanye, who has worked with R. Kelly in the past,  took a moment to give his thoughts on the R. Kelly situation. He also referenced the Michael Jackson documentary titled ‘Leaving Neverland’, which will premiere at this year’s Sundance Film Festival and will focus on two boys who both alleged that the late pop star sexually abused them while they were underage.

While speaking about the documentary on Mr Kelly and Michael Jackson, Kanye mentioned that their art can still be enjoyed in spite of what we hear about the performers.

Speaking on the accusations against R. Kelly, Kanye said

They just gonna pull up full documentaries on him. Then they gonna come with the Michael [Jackson] documentary. … We can all enjoy all their music all we want. I thought I wasn’t going to go there today. If we’re gonna tear down artists, let’s go ahead and take [Leonardo] da Vinci out the Lourve. Let’s take down all the art.

A lot of people were offended by Kanye’s words and they said they were going to cancel him.

RELATED:   Donald Trump and FLOTUS Melania Trump arrive UK on their First Official Visit. Melania is such a stunner!

Following the backlash, Kim Kardashian was forced to take to Twitter to explain what her husband meant and to defend him.

I’m going to nip this in the bud right now. Kanye was speaking about his own experience of everyone quick to say they are cancelling him because of differences in opinion & not being perfect. The analogies were in context to his own experiences, not defending anyone else. 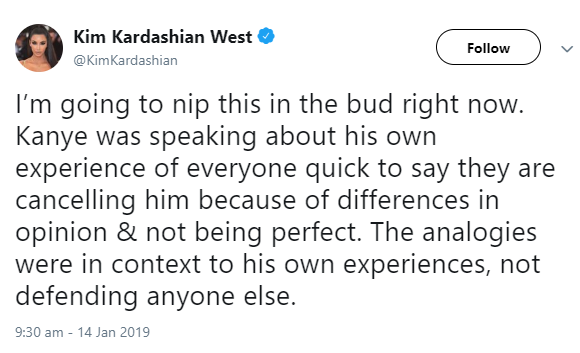 An hour later, she added:

I want to make it very clear, he is not condoning anyone’s actions or unacceptable disgusting behavior. My husband’s words are being taken out of context due to timing. 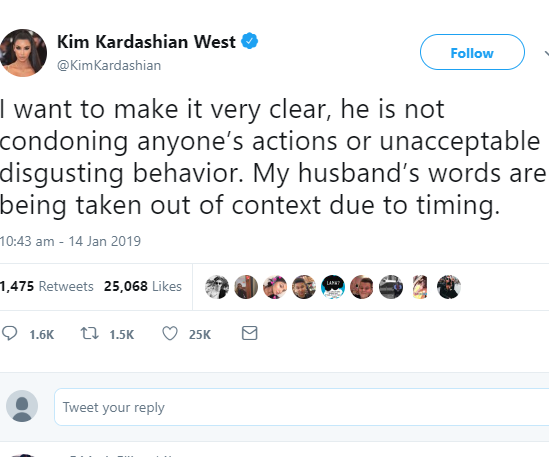 But some Twitter users wouldn’t have it this time and they called out Kim for always having to come online to explain her husband’s utterances.

Months back, Kim came online to defend Kanye and explain what he meant when he said, “slavery is a choice”.

Below are screenshots of Twitter users’ reactions and a video of Kanye defending R. Kelly during Sunday service. 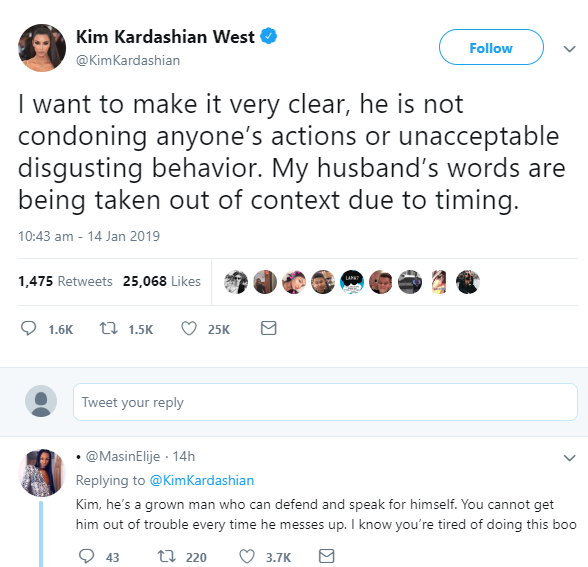