You are here: Home / NEWS / Kim Kardashian helps former prisoner, Matthew Charles by paying rent for the next five years

The reality star, Kim Kardashian is offering to help former prisoner Matthew Charles stand on his feet following his release from prison by paying Matthew Charles’ rent for the next five years.

Recall that she advocates for prison reform and helped secure the release of Alice Johnson from jail last year.

New prison reform laws saw Charles released after serving 20 years of his 35-year sentence for non-violent drug and weapons charges. Kim reportedly reached out to Charles and offered to help pay his rent and find him a “stable place to live”. Us Weekly reports that Charles is planning on saving to be able to buy a home of his own while Kim takes care of his rent for the next few years. 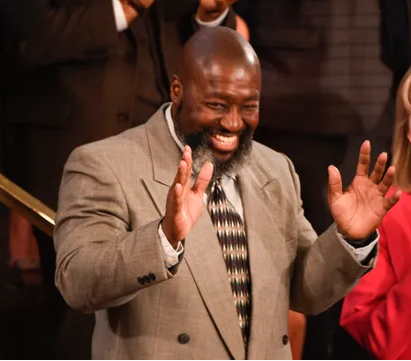 Since his release, Charles has bought a car, been staying with a friend in the city’s River Glen neighborhood and found full-time employment with Families Against Mandatory Minimums — a nonprofit justice reform advocacy group.

But when he went to apply to rent a town home last Tuesday, he was denied on the basis of his criminal history and his lack of credit after being incarcerated for more than 20 years. So Kim decided to step in and save the day.

I just received the most wonderful news tonight that I just had to share with everyone.

Kim Kardashian-West heard about my situation, was moved and has decided to help me. And to me in the most unbelievable way.

Kim did not do this for attention or publicity, but I had to share it, because it’s [too] good not to, and my heart is about to burst with happiness, that I wish you to rejoice in this news with me.

RELATED:   If you do anyhow, you see anyhow - Governor Yari of Zamfara tells Meningitis victims 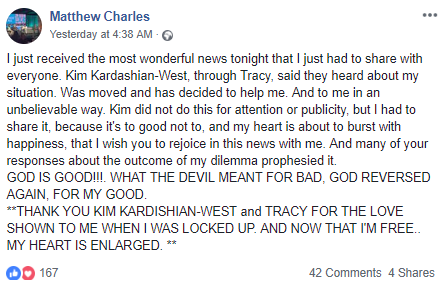