Kim Kardashian spoke about her battles with the rare skin disease, psoriasis which she first got in her 20s, saying it was so bad this year it covered her face and then she developed the bon/joint infection, arthritis.

Kim, a mother of four, and also Kanye West’s wide has previously talked about psoriasis on her reality show, Keeping up with the Kardashians, but on Thursday she revealed much more in an essay shared on her sister Kourtney’s website POOSH.

‘Earlier this year is when it got extremely bad – it covered my whole face and a majority of my entire body,’ the Kim said.

‘Today I’m sharing with Poosh my journey with the autoimmune conditions psoriasis and psoriatic arthritis, including what’s worked for me and how I’ve adjusted my life since being diagnosed,’ 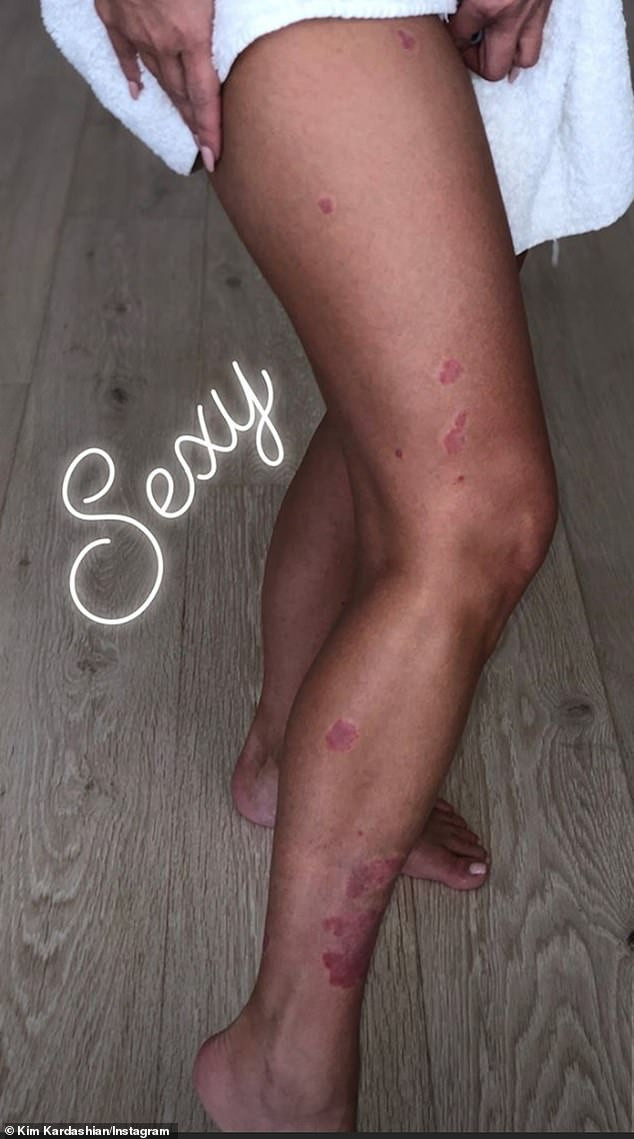 Kim also said unlike her mother who had psoriasis but was able to treat if with ultraviolet rays from a tanning bed, she cant treat hers same way.

‘It’s been 13 years since I experienced my first psoriasis flare-up…. I am the only child my mom passed down her autoimmune issue to. Lucky me, lol,’ she stated. 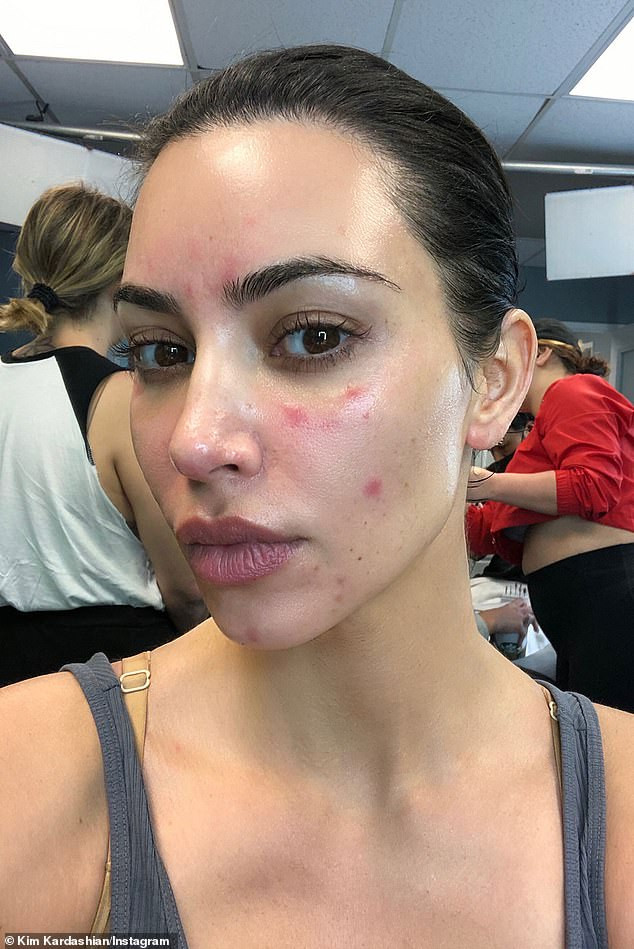 ‘When I was 25, I had my first psoriasis flare-up. I got a common cold, and since psoriasis is an autoimmune condition, this triggered it. It was all over my stomach and legs.

‘Luckily, in my apartment complex at the time, my neighbor was a dermatologist.

‘I showed it to him, and he said to come into the office and he would give me a shot of cortisone and then hopefully it would go away (since it was my first big outbreak).

‘I did this and my psoriasis completely went away for about five years,’ she explained.

It came back when she was in her early thirties.

‘At the time, I wasn’t sure it was psoriasis. I was living in New York—I will never forget it, since it was our DASH store opening in November.

‘I was wearing this glitzy sequin dress from our store to the opening and I came home afterward and was itching.

‘It seemed like it came out of nowhere, but I thought that my skin was just sensitive toward the dress’s material,’ she said. It wasn’t.

‘And then I came home to LA for Mason’s first birthday party and my mom looked at my leg and said it was definitely psoriasis,’ .

Kim added ‘this is when my real psoriasis journey began.’

‘The lower spot on my right lower leg consistently stays flared up.’ And she has learned to live it.

‘when i got pregnant both times, it went away. That was amazing.’

But then it came back again. ‘Earlier this year is when it got extremely bad—it covered my whole face and a majority of my entire body.’

‘I have that one patch on my right leg that is the most visible. I don’t even really try to cover it that much anymore. Sometimes I just feel like it’s my big flaw and everyone knows about it, so why cover it?…

‘After this many years, I’ve really learned to live with it’.

And then she noticed the arthritis, as she said: ‘One night, I woke up to use the restroom and I physically couldn’t pick up my phone.

‘I thought it was strange but maybe I just slept on my hands weird and I was so tired, I didn’t need to be checking my phone at that hour anyway. I fell right back asleep.

‘I woke up that morning and I still couldn’t pick up my phone.  I was freaking out—I couldn’t even pick up a toothbrush, my hands hurt so badly.

‘I had worked out the day before and we did an arm day, so I thought maybe one of the exercises strained my hand.’

As the day went on, I got a bit more movement in my hands, but they really hurt from the inside—I felt it in my bones. Everyone assumed it was just my workout, but I knew this felt different.

RELATED:   Most of the rice smuggled into Nigeria are expired and are only fit for animals'' - Lai Mohammed

‘I let two days go by and I remembered I had to fly to Vegas for Jimmy Kimmel. I was so uncomfortable the whole time because my hands were in so much pain. I felt miserable.

‘After I flew home, I went to the doctor because then I thought I could possibly have rheumatoid arthritis. I knew I felt the pain in my bones, and after I Googled the possibilities, I was beyond scared.’

She was tested positive for rheumatoid arthritis and lupus which reduced her to tears and felt lost.

‘You really can get in a crazy headspace when you think you have something. My doctor said I could have a false positive, and he wanted me to come back,’ she said.

‘I went back three days later, which felt like the longest three days of my life! It turns out those tests were a false positive and I did not have rheumatoid arthritis or lupus. I had psoriatic arthritis.’

‘It’s still painful and scary, but I was happy to have a diagnosis. No matter what autoimmune condition I had, I was going to get through it, and they are all manageable with proper care.’

Before the arthritis hit, she spent about four months doing everything natural — ‘every ointment, cream, serum, and foam you can possibly imagine and everything from the dermatologist.’