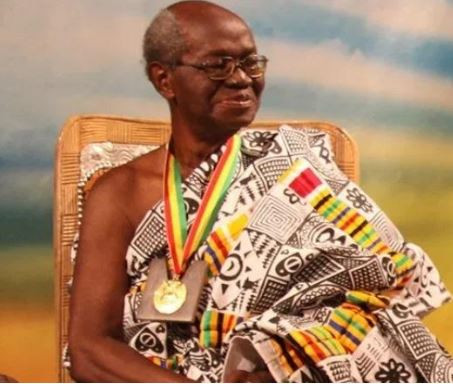 The legendary Ghanaian ethnomusicologist and composer Joseph Kwabena Nketia has died at the age of 97 after a brief illness at Legon Hospital in Ghana’s capital city Accra.

He was born on 22 June 1921 in Mampong in Ghana’s Ashanti Region. In his lifetime he was much celebrated and several events were organised in his honour. At one of such event, the Asantehene Osei Tutu II said Nketia’s “life symbolises the evolution of our nation in the 20th century. There are many parallels in his life’s story, which mirrors the national endeavours in the country. [He is] a bridge between our indigenous culture and modern culture, non-literate and literate traditions, old and young artists, Ghana and Africa in the dissemination.”

As a young man, Nketia received a government scholarship and proceeded to the University of London where he studied at the School of Oriental and African Studies. He had received some education at the Presbyterian Training College in Akropong Akwapin.

After his time at the University of London, he went to Trinity College of Music in London. There he received a bachelor of arts degree. At 37, he went to the US and attended courses in composition and musicology at Columbia University, Juilliard School of Music and Northwestern University.

Upon his return to Ghana, he went into academia and became a professor in 1963. In 1965, he was named the director of the Institute of African Studies. His reputation as a leading figure in ethnomusicology was unrivaled and his work was frequently cited in papers and discussions within the field.

One of his innovations includes the introduction of an easier-to-read 6/8 time signature. It was intended as a revision to the system deployed by Ephraim Amu, the musicologist who influenced Nketia’s first set of choral compositions. Nketia also provided an entirely indigenised basis for the transcription of Ghanaian folk music.

Nketia was the grandfather to the popular Ghanaian rapper Manifest. The rapper took to social media to commemorate the event of the patriarch. “Overwhelming legacy,” he wrote. “A life well lived. Grandpa, thank you. Your humanity was your greatest composition.”