You are here: Home / NEWS / Lol! Read why this lawyer dragged Federal government of Nigeria to court
Yesterday, Chief Malcom Omirhobo, asked a Federal High Court Lagos, to declare as unlawful, rescheduling of public holidays. The defendants in the suit are: the Attorney General of the Federation and the Minister of Interior.
The plaintiff’s suit is brought pursuant to the provisions of order 3 rules six, seven and eight of the Federal High Court Civil Procedure rules of 2009. Omirhobo is seeking an interpretation, as to whether in the face of the Public Holidays Act of 1979, it is legal for the defendants to reschedule public holidays from Saturdays or Sundays to Monday. 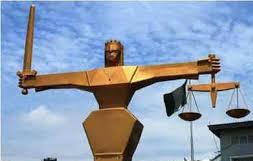 RELATED:   See the photos of the little girls dumped by their parents, the reason will shock you

“Whether it is lawful to have declared October 3 (Monday) as public holidays for the celebration of Nigeria’s 56th independence, instead of October 1 (Saturday) for which it was originally scheduled.”

Omirhobo now seeks a court order, compelling the defendants not to declare October 2, 2017 (Monday) as public holidays for the celebration of Nigeria’s 57th independence, in place of October 1, 2017 (Sunday).