You are here: Home / NEWS / Love is Beautiful! Noble Igwe Notes down how he met his Wife Chioma 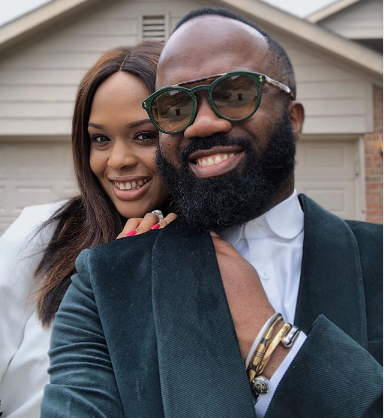 Popular Nigeria media personality, Noble Igwe, the founder of 360 Nobs, has written down how he met his wife and mother of his child.

In a throwback appeal, the writer shared that Chioma was suggested to him by her cousin, who is his friend. He was given Chioma’s BB Pin, and their love started. 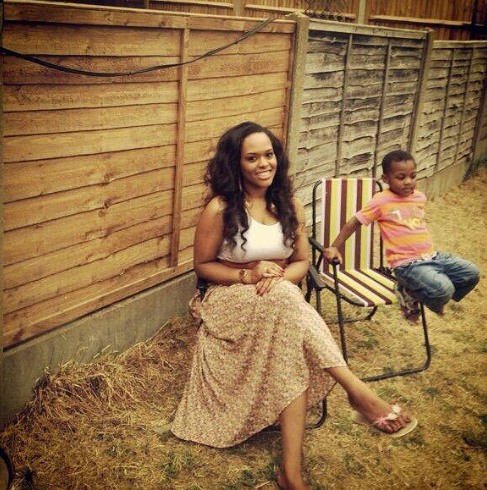 Meeting Chioma.
It was a Friday afternoon and I was at work when my brother-in-law called;
Ned:Yo Nobs,something just crossed my mind.I think you’d like my cousin,she’s based in the UK but she’s totally your type. Let me ask her if it’s okay to give you her BBM pin.
Nobs : Okay, sure but don’t make it look like I’m asking oO
Ned: She’s a babe and she grew up in Aba too.
Nobs : Ngwanu.
Ned gave me Chioma’s pin, I added her,she accepted but I didn’t say anything.
SAT Morning:
Chioma: Who’s this?
Nobs: Hey,Sorry my name is Noble and Ned gave me your pin but if you are not cool with me adding you, I’d just delete myself.
Chioma: I think it would have been better to introduce yourself after adding me.
Nobs: I’m sorry, my name is Noble Igwe .
Chioma: Please what’s your real name ?

It was that moment I knew she wasn’t going to be an easy fry.
This picture was her BBM display picture and I saved it. 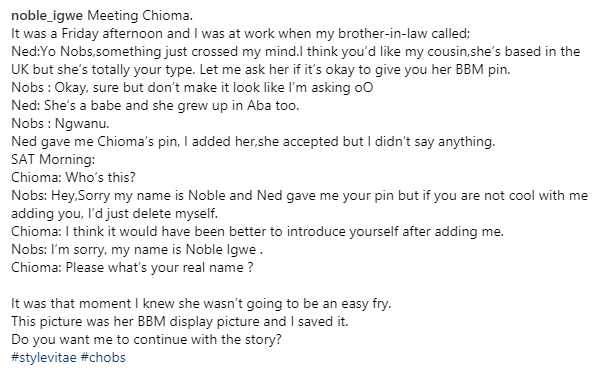 He went on to share the photo Chioma sent to him the first time they chatted and said he was moved by her beauty. 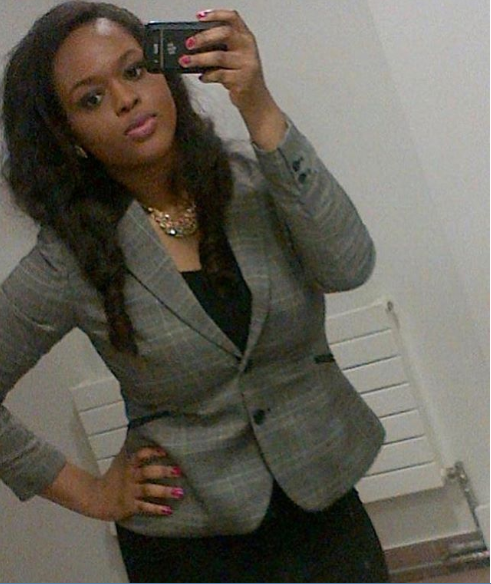 Saturday Morning
Nobs : The full name is Noble Chibuzor Igwe.
Chioma: Oh nice. Kinda cute for an Igbo boy.
*In my head I was like. Kinda cute?
Do you know me? have you not heard of me*.
Nobs: Thank You,Chichi
Chioma: WOW! So fast . Chichi ? Let’s keep it at Chioma for now.
Nobs: Okay. Are you the one in your DP?
Chioma: Yes, why ?
Nobs : You are pretty or maybe it’s the picture.
Chioma: I’m the one.
*in my mind, I was like —> see fine babe but I wasn’t so sure so”
Nobs : Can I see another picture of you.
Chioma : I’m about to step out so let me send you one.
When I saw this picture of Chioma (image up)In a short skirt, I wanted to book a flight to England.
Nobs : You are good looking.
Chioma: Thank You.
*But as a sharp boy I wanted to know how such a pretty girl will be single so I added*
Nobs : It’s Saturday and I imagine you must have a lot guys lined up to take you out this weekend.
Chioma : Sure
It was that moment that I knew that I didn’t stand a chance.
Do you know what I did next ? 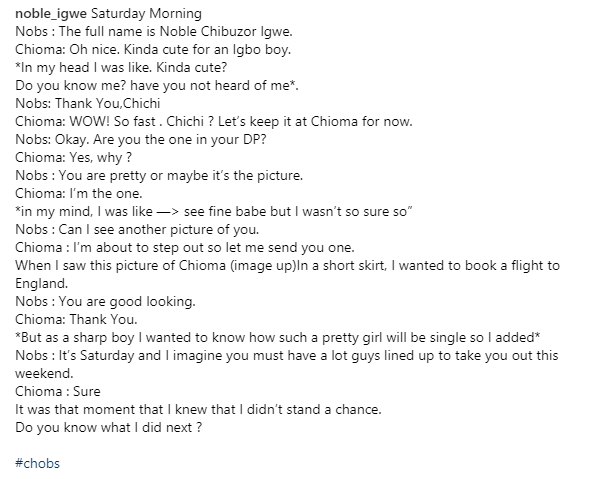