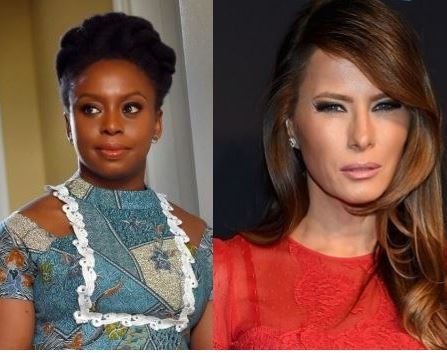 Adichie reportedly made the statement in an interview with international magazine, Esquire UK where she discussed her ideology on feminism, Melania Trump’s visit to Africa and racism.

When asked if she thought Melania Trump was racist, she answered in the affirmative with reference to Melania’s recent visit to Africa.

“Had you asked me this question yesterday, I would have said ‘yes’ and my evidence would be that she supported her husband when he was being incredibly racist to Barack Obama. But I just watched an interview that she gave and I was just appalled by it. She sort of stepped out of a colonial 1750 guidebook about how to be in Africa.

There’s a pith helmet and then I am thinking maybe this is supposed to be ironic? Maybe it is a critique of colonialism.
She really thought this is what you do when you go to Africa and it says something about someone who is so removed from reality.”

Moving on to reference a jacket Melania wore to one of the US children immigration camps which read “I really don’t care: Do you?” Adichie said, “And I remember when the media made a lot of noise about that jacket. I remember actually kind of being on her side when all that noise was happening.
“I thought, she doesn’t know, she couldn’t possibly do this knowingly. She did, so the answer to your question is ‘yes’. I think she is racist,”