You are here: Home / NEWS / Mrs Lara Oshiomhole finally gets to be Nigerian citizen (Photos)

The Minister of Interior retired Lt.-Gen. Abdulrahman Dambazau,‎ who presented the certificates of citizenship to the foreigners, charged them to be good ambassadors of Nigeria. 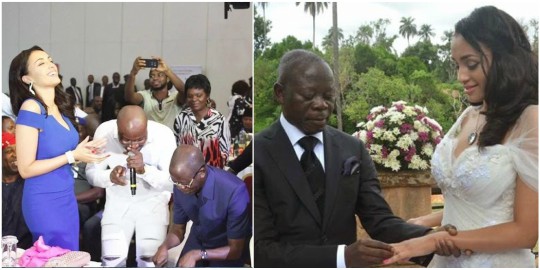 Mrs Lara Oshiomhole from Cape Verde, who got married to former Governor of Edo State, Adams Oshiomole‎, in 2015 was one of the recipients.

RELATED:   South African lady commits suicide after being raped by her boyfriend

NAN reports that Dambazau in his remarks, said that 335 applicants were approved by the Federal Executive Council (FEC) in January, out of the over 500 foreigners that applied. He explained that 245 of the foreigners approved were granted Citizenship by‎ Naturalisation, while 90 were by Registration, mainly foreign women married to Nigerians.

RELATED:   Rihanna has something to say about Met Gala 2019