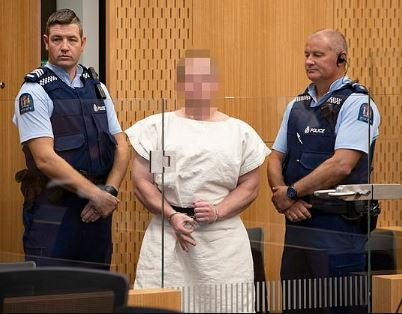 The New Zealand mosque killer faces an ‘unprecedented’ sentence that bars him from ever applying for release, but could yet dodge terror charges, legal experts say.

Brenton Tarrant has been charged with one initial count of murder over the mass shootings that killed 50 people in the southern city of Christchurch and faces life in prison.

In New Zealand, being found guilty of murder usually comes with a minimum of 10 years in jail before possible parole. Legal experts said the 28-year-old Australian’s alleged crimes were so extreme they could warrant the heaviest sentence imposed by a judge in the South Pacific nation since the abolition of the death penalty in 1961.

However, one academic said prosecutors may shy away from terror charges despite Prime Minister Jacinda Ardern labelling the massacre an act of terrorism.

The longest-ever murder sentence imposed in New Zealand was in 2001 when a judge sentenced William Bell to life imprisonment with a 30-year minimum term for a triple murder.

University of Auckland criminal procedure expert Bill Hodge said despite Prime Minister Jacinda Ardern labelling the massacre an act of terrorism, prosecutors may shy away from terror charges. The Terrorism Suppression Act was only introduced in 2002, after the US 9/11 attacks and is untested in the courts.