You are here: Home / NEWS / Nicole Curran in tears after getting death threats on social media from ‘Bey Hives’ 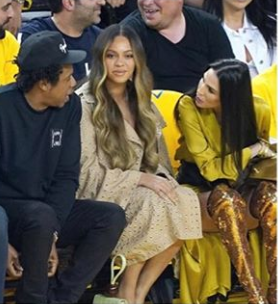 Nicole Curran, the wife of Warriors owner Joe Lacob, has had a terrible time after Beyonce’s fans took to social media to abuse and bully her following the release of a video of her leaning over Beyonce to speak to Jay-Z.

She had to disable comments on her posts after the Beyhive went to every single one of her posts on Instagram, from the first to the last, to leave bee emojis and insult her.

Ramona Shelburne, Senior Writer for ESPN, took to Twitter to narrate what really happened between Nicole and Beyonce and revealed how the incident has affected Nicole, who is the wife of the Warriors owner, Joe Lacob.

She tweeted: “Just spoke to Nicole Curran, the wife of Warriors owner Joe Lacob, about the “incident “ with Beyoncé last night. She was in tears. Said she had been getting death threats on social media all night this morning she disabled her IG account just to make it stop.” 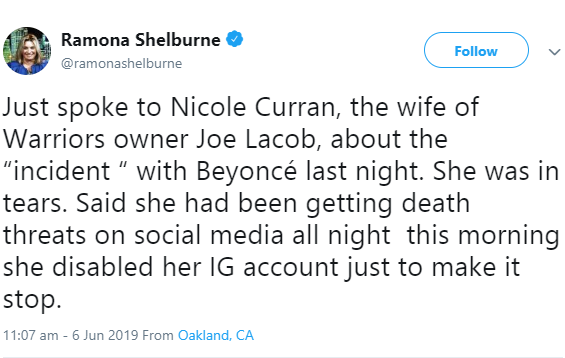 She added: “Curran says Jay Z asked for a vodka soda. She asked if he wanted lime with that. But it was loud in Oracle and she couldn’t hear, so she leaned over. That’s where the photos of Beyoncé looking askance at her come from.” 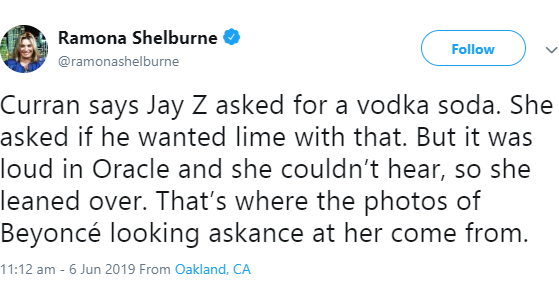 “Curran says she then went to go get them those drinks. “There was no hostility. I was trying to be a good hostess,” she said. “I’ve never experienced cyber bullying like this. I can’t believe our players go through this. That kids go through this.“ ” 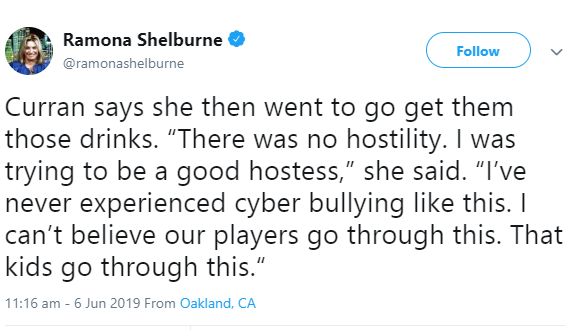