You are here: Home / NEWS / Nigerian Army refute claims that they have plans to interfere in the crisis rocking Kogi state 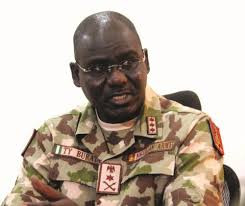 The Nigerian Army has denied plans to interfere in the crisis rocking Kogi state. Yesterday Senator Dino Melaye accused the Kogi state government of planning to forcefully remove the Chief judge to disrupt activities in the state. He wrote on his twitter handle

”Meeting just concluded in Kogi State Govt house have mandated the Speaker Kogi State House of Assembly to illegally remove the chief judge of Kogi State tomorrow or face impeachment. We shall resist turning our state into a Banana State. We are watching..

The Army has released a statement denying this allegation. Read the statement below

The Nigerian Army has received a report of the purported or planned use of soldiers to remove and eject the Kogi State Chief Judge from his official residence.

The NA under the leadership of Lieutenant General Tukur Yusuf Buratai will not contemplate interfering under any guise in the internal Executive – Judiciary Conflict in Kogi State or any other State for that matter.

The Army Headquarters has already directed and warned the Commander in the State to stay clear of this conflict (not to interfere under any guise).

As a professional and law abiding organisation, the NA hereby strongly distances itself from Kogi State conflict between the State Executive and the Judiciary.