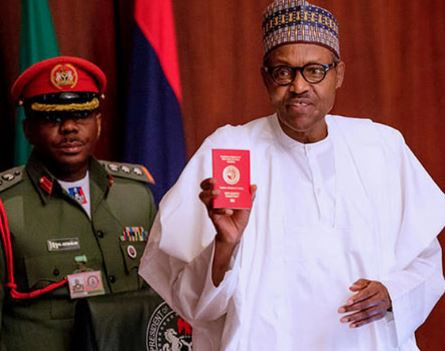 The Nigeria Immigration Service has started the issuance of the new passport booklet with 10-year validity at its headquarters, Abuja.

It will be available in Ikoyi on June 3; Alausa, Lagos on July 8; and London on July 29, 2019. The enhanced polycarbonate booklet with 64 pages, which was launched by President Muhammadu Buhari on January 15, 2019, was embedded with the National Identity Number and costs N70,000.

Conducting journalists round the passport office in Abuja on Monday, the NIS Public Relations Officer, DCI Sunday James, said the new booklet was part of a comprehensive passport reform approved by the Federal Government to improve the quality and security of the travel document as well as to reduce incidence of damage, counterfeit, and forgery.

He explained that it was compulsory for passport applicants to have a NIN, adding that the NIS management had set up a desk at the passport office where individuals can register for the NIN.  James stated, “the National Identity Number is compulsory for all applicants to the new document. To make it easy for applicants, the Nigeria Immigration Service has provided space for National Identity Management Commission at the service headquarters, Abuja, to register applicants and issue to them the NIN. The public are advised not to rush for the new booklet, as the new enhanced passport will run concurrently with the old one.”

The NIS spokesman further said that applicants holding a passport with more than six months’ validity are not eligible for the new booklet, except in the case of damage, change of data and those whose booklets have been exhausted. He advised applicants to pay online or directly to the banks situated within the passport offices.