You are here: Home / NEWS / Nigerians protest against CJN Walter Onnoghen In London 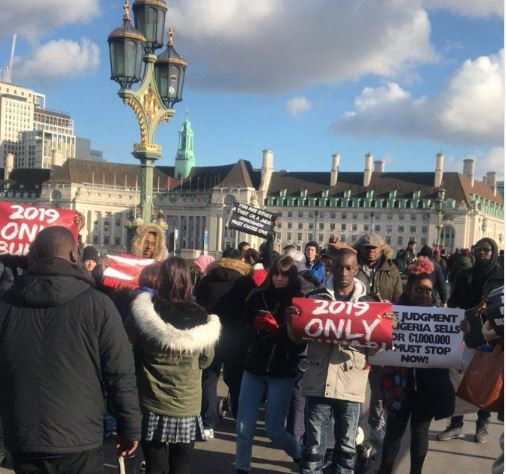 Nigerians under the group of Arise for A New Nigeria stormed the streets of London, at 10, Downing Street, close to the Prime Minister’s office, to express solidarity with President Buhari over the suspension of Walter Onnoghen as the Chief Justice of Nigeria (CJN).

They also presented a letter addressed to Prime Minister Theresa May, in which they urged Britain to support Buhari’s anti-corruption fight, especially concerning Onnoghen’s suspension.

Speaking on behalf of the group, Andrew Kobani, President of the group, restated their commitment to supporting Nigeria’s present administration, as it has shown determination to “reduce corrupt practices”. 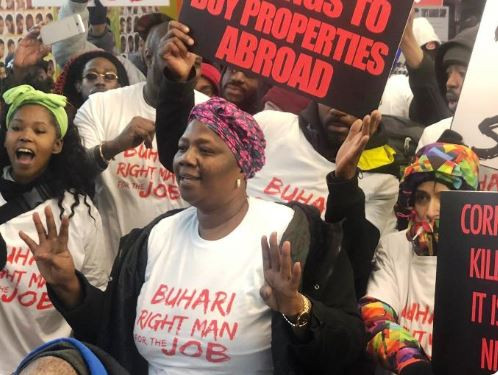 “Madam Prime Minister may wish to note that Nigeria is experiencing a turbulent period in the fight against corruption as initiated by the administration of Muhammadu Buhari, President of the Federal Republic of Nigeria. Suffice to note that since 2015, the present administration has initiated measures aimed at reducing corrupt practices in the conduct of government business at all tiers of governance. This effort has yielded positive results to the admiration of the bulk of Nigerians and the consternation of a select few that have benefited from the rot in the system’.

“Undeterred, the government of President Muhammadu Buhari has carried on with enthusiasm and a determination to see that structural defects are fixed to curb the rot in the system for the betterment of Nigeria as a country.

“Madam Prime Minister may also wish to note that the bane of underdevelopment in Nigeria is as a result of the lackadaisical attitude of previous governments in the fight against corruption that has resulted in the wanton disregard for accountability and transparency in the conduct of government businesses and by extension governance in Nigeria.

“Since 2015 when the administration of President Muhammadu Buhari took over the affairs of the state in Nigeria, Nigeria has recorded tremendous progress in governance evident in the dividends of democracy trickling down the ladder.

RELATED:   Negative People should not follow you out of this year, these are ways to get rid of them

“Madam Prime Minister, however, the present administration has encountered numerous challenges from individuals and organisations that have subverted the system through nefarious ways and means all in the quest to portray the Muhammadu Buhari administration in poor light in an attempt to pitch the populace against the government to fulfil their personal agenda of causing unrest and disaffection in the country.”