You are here: Home / NEWS / Odion Ighalo to Retires from Super Eagles

Odion Ighalo as well as Mikel Obi has retired from international football and is expected to make the announcement soon, after a successful outing at the 2019 African Cup of Nations.

The Shanghai Shenhua striker had limped off in the 44th-minute of the third-place match against Tunisia on Wednesday, after scoring the only goal that gave the Super Eagles team the bronze medal.

RELATED:   Winners at the Oscar Awards

Ighalo’s retirement is coming after he made his national team debut under Daniel Amokachi in 2015, and playing his first World Cup competition in 2018 in Russia. Sports journalist Osasuo reported that Ighalo agreed with Super Eagles coach Gernot Rohr, not to make a public statement before the third-place playoffs with Tunisia. 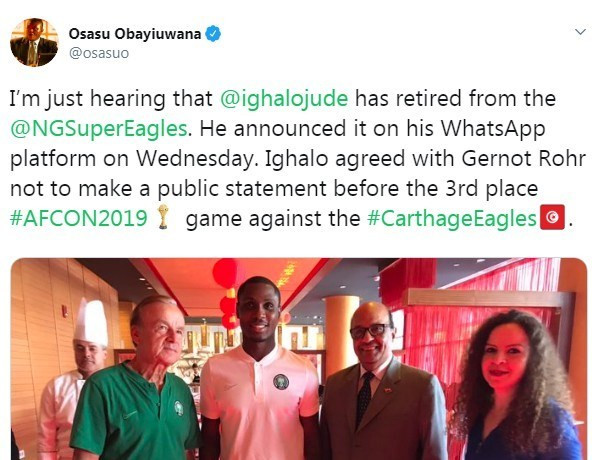 He is on the good run to win the 2019 Golden Boot award at AFCON with five goals as Senegal’s Sadio Mane and Algeria’s Adam Ounas are closest with three goals.