The American reality star turned President of the most powerful country in the world has insisted on following up on his campaign promise of deporting non-Americans. Amala.ng made some investigation and picked out 10 Prominent Nigerian-Americans that are untouchable not even by Donald Trump. See them below:

1. Jude O. Nkama
Nkama, on January 6, 2016, became the first African to be appointed as
a judge in the 349-year history of the city and State of New Jersey,
USA.

2. Hakeem Kae-Kazim
Hakeem Kae-Kazim (born 1 October 1962) is a Nigerian actor best known
for his work in the Starz television series Black Sails and his
portrayal of Georges Rutaganda in the 2004 drama film Hotel Rwanda.

Kae-Kazim is an appointed global ambassador for Africa 2.0, a civil
society organisation providing a platform for emerging and established
African leaders
to drive forward the transformation of Africa. 3. Wale Olubowale Victor Akintimehin (born September 21, 1984), better
known by his stage name Wale, is an American rapper from Washington,
DC. He rose to prominence in 2006, when his song “Dig Dug (Shake It)”
became popular in his hometown.

Wale became locally recognised and continued recording music for the
regional audience. Producer Mark Ronson discovered Wale in 2006 and
signed him to Allido Records in 2007. While signed to that label, Wale
released several mixtapes and appeared in national media including MTV
and various Black- American-focused magazines. A song called “Ridin’
in That Black Joint” was featured in the popular video game Saints Row
2 ‘s soundtrack in 2008. 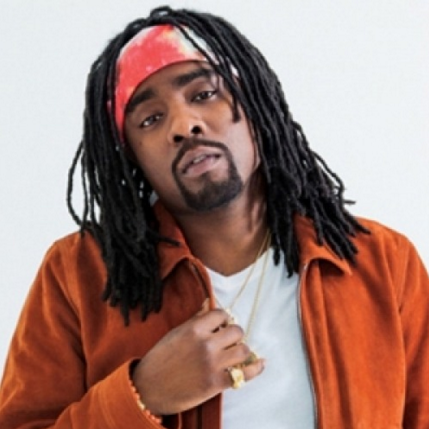 In 2008, Wale signed with Interscope Records for $1.3 million, and his
debut album Attention Deficit was released in 2009 with the singles
“Chillin “, “Pretty Girls “, and “World Tour “. The album, although
under- shipped, received positive reviews from critics. In early 2011,
Wale signed with Rick Ross’ Maybach Music Group , where members of the
label released a compilation album, Self Made Vol. 1 on May 23, 2011.
His second studio album, Ambition was released November 1, 2011, with
mixed reviews. His third studio album, The Gifted , was released on
June 25, 2013, to mainly positive reviews; it debuted at number 1 on
the Billboard 200 . His second Billboard number 1 album The Album
About Nothing was released on March 31, 2015.

4. Uzo Aduba
Uzoamaka Nwanneka “Uzo” Aduba born February 10, 1981) is an American
actress and singer. She is known for her role as Suzanne “Crazy Eyes”
Warren on the Netflix television series Orange Is the New Black
(2013–present), for which she won a Primetime Emmy Award for
Outstanding Guest Actress in a Comedy Series in 2014, a Primetime Emmy
Award for Outstanding Supporting Actress in a Drama Series in 2015,
and two Screen Actors Guild Awards for Outstanding Performance by a
Female Actor in a Comedy Series in 2014 and 2015.

She is the only actress to win Emmy Award recognition in both the
comedy and drama genres for the same role. Aduba was born in Boston,
Massachusetts, the daughter of Nigerian parents of Igbo origin from
Achi in Enugu State.

5. Dayo Okeniyi
Dayo was born in Lagos, Nigeria, and has four siblings. His father is
a retired customs officer from Nigeria, and his mother is a literature
teacher from Kenya . In 2003, he moved with his family to Indiana,
United States, from Nigeria and later moved to California. He earned a
bachelor’s degree in visual communications at Anderson University
(Indiana) in 2009. 6. Ilesanmi Adesida
Ilesanmi Adesida (born 1949, Ifon, Ondo State , Nigeria) is a
naturalized American physicist of Yoruba Nigerian descent. He is the
Donald Biggar Willett Professor of Engineering, former Dean , College
of Engineering , University of Illinois at Urbana-Champaign ; and
since 2007, a member of the board of Fluor Corporation. In May 2012,
the Board of Trustees of the University of Illinois selected Adesida
to be the next vice chancellor for academic affairs and provost of the
Urbana campus; a position he held from August 15, 2012 to August 31,
2015 when he was forced to resign. Adesida retired from UIUC in 2016.
On September 21, 2016, he was appointed Provost at Nazarbayev
University in Astana, Kazakhstan.

7. John O. Dabiri
 John Oluseun Dabiri ( Yoruba : John Olúseun Dábírí ), (born 1980) is
an American biophysicist, professor of aeronautics and
bioengineering, currently at the Civil
& Environmental Engineering department at Stanford University. He was
formerly dean at the California Institute of Technology. He is best
known for his research of the hydrodynamics of jellyfish propulsion
and the design of a vertical-axis wind farm adapted from schooling
fish . He is the director of the Biological Propulsion Laboratory,
which examines fluid transport with applications in aquatic
locomotion, fluid dynamic energy conversion, and cardiac flows , as
well as applying theoretical methods in fluid dynamics and concepts of
optimal vortex formation.

In 2010, Dabiri was awarded a MacArthur Fellowship for his theoretical
engineering work. He established the Caltech Field Laboratory for
Optimized Wind Energy (FLOWE) in 2011, [4] a wind farm which
investigates the energy exchange in an array of vertical-axis wind
turbines. His honours include a Young Investigator Award from the
Office of Naval Research , a Presidential Early Career Award for
Scientists and Engineers (PECASE), and being named as one of Popular
Science magazine’s “Brilliant 10 ” scientists in 2008. Bloomberg
Businessweek magazine listed him among its 2012 Technology
Innovators. 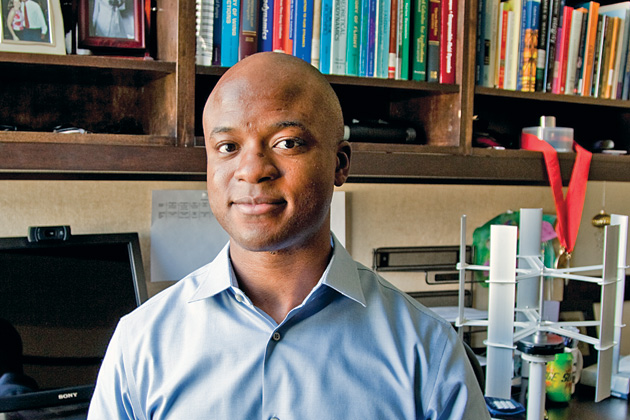 8. Vop Osili
 
Samuel Ifeanyi “Vop” Osili, Jr. is a Democratic politician from
Indianapolis, Indiana. He is a member of the Indianapolis City-County
Council from the 15th district, in the southwestern portion of Center
Township . On December 22, 2011; an Indiana judge declared him the
secretary of state-elect of Indiana due to first-place finisher
Charlie White ‘s ineligibility, though this was later reversed on
appeal.
Osili was born in Lagos, Nigeria , to a Nigerian father and an
American mother. He was said to be a very talkative as a toddler,
which led his parents to nickname him “Vop”–short for “Voice of the
People.”
The nickname stuck. In the midst of the Nigerian Civil War , he and
his mother fled back to the United States; his father didn’t follow
them for another five
years. They settled in his maternal grandparents’ home in Haughville.
He grew up as a Republican, but became a Democrat in the 1990s.9. 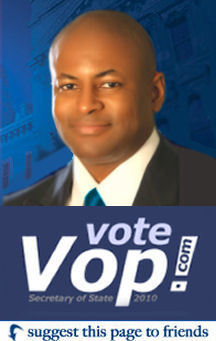 9. Victor Ukpolo
Ukpolo is most known for his efforts in restoring SUNO to operation
after Hurricane Katrina, specifically his role in obtaining funds for
SUNO’s recovery, including
$44 million for student housing, $32 million for classroom buildings,
and various grants for other academic purposes. In 2012 the Carnegie
Corporation selected Ukpolo as one of 45 naturalised citizens of the
United States for Carnegie’s Americans by Choic award.)
Ukpolo came to the United States at age 23 as a student at the
University of Maryland at College Park from which he received his
bachelor’s degree . To finance his education, he worked in a
restaurant washing dishes and drove taxicabs in the District of
Columbia. He received his master’s degree and Ph.D. from American
University in the nation’s capital. From there he steadily climbed
through various assignments and challenges to the chancellorship at
SUNO. He is thought to be the first native-born Nigerian to head a
university in the United States.

10. Soni Oyekan
Soni was born in Aba, Nigeria on June 1, 1946 and came to the United
States to study in 1966.
Soni was a recipient of an African Scholarship Program of American
Universities (ASPAU) award which was administered by the African
American Institute (AAI) in 1966. The scholarship award enabled Soni
to pursue his studies in Engineering and Applied Sciences with
specialization in Chemical Engineering at Yale University. He
completed his Bachelor of Science degree program at Yale University in
1970.

After his undergraduate studies at Yale, Soni moved on to Pittsburgh,
Pennsylvania and completed graduate studies in Chemical Engineering at
Carnegie Mellon University . He was awarded the Master of Science (MS)
degree in 1972 and the doctoral (PhD) degree in 1977. His MS degree
thesis title was on “The Stability of Low Tension Interfaces—Effects
of layers of Discrete Dipoles and Charges”. The title of his doctoral
thesis was “An Infrared Spectroscopic Study of the Isomerization and
Hydrogenation of Cyclic Olefins Over Zinc Oxide”. Soni has over 39
years of experience in petroleum refining technologies and operations.