You are here: Home / NEWS / So sad! See photos of Killer Port-Harcourt father with his dead son

A police source in Port Harcourt confirmed this.A female neighbor of the deceased said that Inimgba was not an attentive father and would abandon George, forcing him to fend for himself. 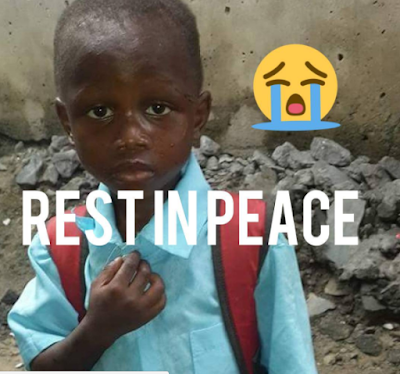 The neighbor said only days before, on Thursday precisely, she bought a pencil for him to use at school only for her to hear he had been killed by his father.

RELATED:   Workers day | May 1st set aside to celebrate workers

She told Vanguard. “Just this week, I saw this little boy at a shop, people gathered around him. He stole a doughnut and everyone was blaming his father, saying he wasn’t giving  him food and that, that was  why the boy stole. They said   the father and the boy’s  step mum maltreated him. I saw scar all over his body. The people he stole the doughnuts from even gave him more doughnuts and soft drink. I took the little boy to my house and interviewed him. He was an intelligent boy. He told me the same thing and even asked me to give him a pencil to school which I did.

I also bought biscuits for him, took photograph of him   before he left. I promised to see his father but couldn’t due to my tight schedule this (last week). This morning, I woke up to   hear that his father has killed him. The father beat him to death. The father  is at the Amadi police station now   while the little boy’s  body has been taken to the mogue. I saw the father briefly being held  at the station as he was claiming that he only beat him small”, she said

According to Sri George who shared the incident on Instagram, the father and the boy’s stepmother have now been handed over to the police…