Ibanga Akpabio, a cousin to former Governor Godswill Akpabio of Akwa Ibom State has been arrested by the Economic and Financial Crimes Commission  for his alleged involvement in a N10m oil scam.

The EFCC said on its official Facebook page that the suspect was arrested on Tuesday in Port Harcourt, Rivers State.

Akpabio’s arrest was occasioned by an allegation that he collected the N10m from a potential investor in petroleum products. 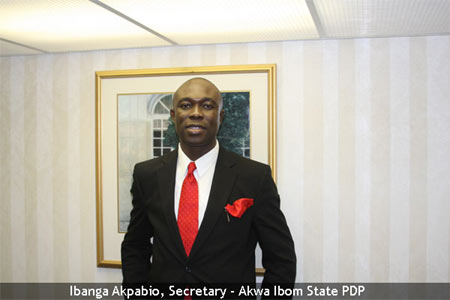 The commission added, “Specifically, Akpabio reportedly approached the investor to invest the money as equity in the purchase of petroleum product directly from a floating station belonging to the Nigerian National Petroleum Corporation. He allegedly assured the inventor that he had secured all necessary approvals for the running of the business.

“Akpabio allegedly collected the money through a Diamond Bank account being operated by Fastej Enterprises and neither kept faith with the business arrangements with the investor nor returned his money to him.”

It was learnt that the suspect is urgently undergoing interrogation in the Port Harcourt zonal office of the EFCC.