You are here: Home / ENTERTAINMENT / Shocking confession! Nollywood actress that vows to marry Pete Edochie before he dies (Photos)
Liberian-born Nollywood actress, Blessing Brown, has revealed that she loves the legendary actor, Pete Edochie, so much and she described him as her dream husband.
Blessing who has featured in over 10 Nigerian movies after she relocated to Nigeria 6 months ago, admitted that she has been longing to meet the veteran actor, adding that she has always admired him since she was a child, and appreciated everything about him both the way he talks, walks, and acts. 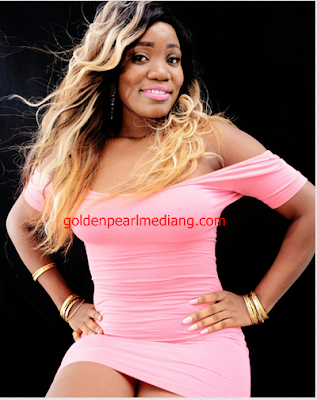 While speaking in an exclusive interview with The Sun, Blessing stated that although Pete Edochie is married, but she does not mind getting married to him and no one can take his place in her heart not even his son, Yul Edochie.
The budding actress who revealed that in Liberia, Nigerian actors and actresses are held in high esteem and are seen as gods, said;
“Since I was a child, I have been crushing on him. I still look forward to seeing myself in the arms of Pete Edochie. I don’t mind the fact that he is married; he is my dream husband. 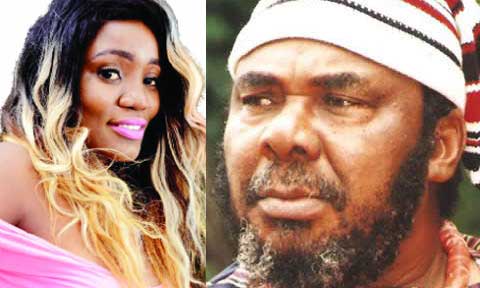 “I like the way he talks, walks and acts. Nobody else can substitute him in my life right now. Not even his younger version, Yul Edochie; he doesn’t entice me. All I want is Pete and not his sons or look alike!
“I love him regardless of his age. Older men make good husbands. Age is just a number. If I love a 70-year old man, I don’t see why I shouldn’t marry him.
“I don’t have time for small boys still running around and wearing studs in their ears with lots of chains hanging around their necks.”

She also added that aside being old, her lover must be wealthy as well.
“Any man that wants to date or marry me must be tall. I can’t date a short man because I will always be looking at him like he is my child. I want someone that I would look up to. He has to be rich and caring too. Handsomeness is an added advantage.”
On the reasons she came to Nigeria to pursue her acting career, Ms Brown said that back in her country, Nigerian actors were seen as gods and everyone looked forward to acting alongside them.
“In Liberia we see Nigerian actors as gods. That is why the likes of Frank Artus, Juliet Ibrahim, and Van Vicker among a host of others moved over to Nigeria.
“Now I am here and I look forward to taking over from Yvonne Nelson and Ini Edo among others”, she stated.
RELATED:   OMG! See Bobrisky's real HIV/AIDS test result (See photos)