A private security guard attached to Frankies Filling Station along Enerhen road in Uvwie Local Government Area of Delta State, was on Monday found dead inside a petrol tanker belonging to the owner of the station where he works.

The middle-age man identified as Emmanuel Obene also known as Emeke had been declared missing since last week Saturday only to be found dead in the tanker when it was about loading fuel at one of the fuel depots near Warri Refinery.

RELATED:   Megan Markle Sends Letter To Her Ex-school Mates Apologizing For Not Showing Up To Their 20th Year Reunion

Sources at the filling station told Punch that the security guard might have died in the process of trying to scoop fuel from the tanker.

The father of a 12-year-old girl has been working in the filling station for some years and was the head of security before the unfortunate incident occurred.

RELATED:   We Cannot Fix In Three Years What PDP Failed To Do In 16 Years – Oshiomole 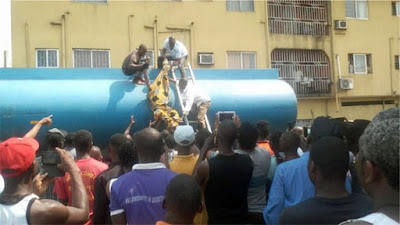 At about 1pm on Monday when Punch visited the scene of the incident, the police from the Enerhen Divisional Police Station with the help of sympathisers, were seen evacuating the remains of the victim and the bucket he was allegedly using to scoop fuel from the tanker.

Efforts to speak with the management of the filling station and police operatives sent to evacuate the corpse proved abortive.

However, the corpse had been deposited in one of the morgues in Effurun, awaiting police investigations.

The state’s commissioner of Police, Mr Zanna Ibrahim, confirmed the incident when contacted on the telephone.