You are here: Home / POLITICS / Shocking! See how Senate President and his deputy rented invisible house worth over N200m with government money

A N125m building allegedly rented for Senate President Bukola Saraki by the Abuja Metropolitan Management Council (AMMC) could not be traced by TheCable after several searches.

And, curiously, nobody is willing to comment on the mystery as all the key players in the affair refused to pick calls or reply SMS from TheCable.

The property is said to be located at Plot 973, Mban Close, off Pope John Paul Street, Maitama, Abuja, rented at N50 million per year on a two-year tenancy, with fees and VAT bringing the total cost to N125 million.

The property is described in the tenancy agreement as a five-bedroom detached duplex with two-room guest chalet boys quarters, a swimming pool, air conditioners and 1,350 square metres with “ample parking space”.

Felix Akpoti, the director of Legendark Consultants, the lessor, signed for his company while Omoniyi Olaloye, an engineer, signed for AMMC, which is under the Federal Capital Development Authority (FCDA).

The only problem, though, is that Plot 973 could not be physically traced.

Yusuph Olaniyonu, Saraki’s spokesman, has denied knowledge of the property, insisting that the senate president knew nothing about the rent as he lives in his own house at Lake Chad Crescent, Maitama, Abuja.

“I am telling you, it is a lie. The senate president lives in own house, and he does not take rent. He has no link to this issue,” he told TheCable.

It was described in the rent agreement as a five-bedroom detached duplex with a guest chalet of 3-bedroom boys quarters.

However, the house is unoccupied as Ekweremadu still lives at his personal residence at the Apo Legislative Quarters.

His media aide, Uche Anichukwu, also told TheCable the deputy senate president is not aware of the property.

Anichukwu said: “I’m not aware of any residential accommodation rented for the deputy president of the senate. A group known as CATBAN, supposedly a civil society group, initially alleged that the deputy president of the senate was paid over a hundred million by the FCT in lieu of accommodation. We refuted that allegation. We still stand by our statement because was a sponsored mischief. Nobody paid any money was to Senator Ekweremadu.

“Now that they have shifted to that a property was rented for him, my response is that I’m not aware that the deputy president of the senate was given any residential accommodation you. I know he lives at App Quarters. However, even if the FCT does give him any residential accommodation, it is still within his statutory right. Everybody knows that the FCT provides accommodation for president, vice-president, senate president, deputy president of the senate, speaker of the house of representatives, deputy speaker of the house, and the chief justice of Nigeria.

“Meanwhile, I’m also aware that the the presiding officers turned down over N10 Billion proposed by the FCT in the 2016 budget for the construction of their residential accommodation as as they said that it did not reflect the hardship in the country.”

Akpoti, who signed the agreements, refused to speak to TheCable on phone, demanding to see the documents first.

However, he did not give his location and failed to respond to further phone calls from.

He later told TheCable to email him the queries. But instead of responding to them he directed TheCable to the FCDA and the senate committee on FCT.

FCDA refused to comment, while Dino Melaye, chairman of senate committee on FCT, did not respond to an SMS query.

He was quoted by Daily Trust as saying the documents are “made in Taiwan”.

A SERIES OF OFFERS

After a brief meeting on Monday, Muhammad Sule, FCDA spokesman, directed TheCable to Safiya Umar, acting director of the AMMC, to get details of the transaction. He said he had no idea of it because it was not within his purview.

TheCable called Umar repeatedly and even sent her an SMS, but she did not respond as well.

A letter of a contract award from AMMC to Legendark Consultants, dated 30 March, 2016, showed that Plot 973 was for the senate president. 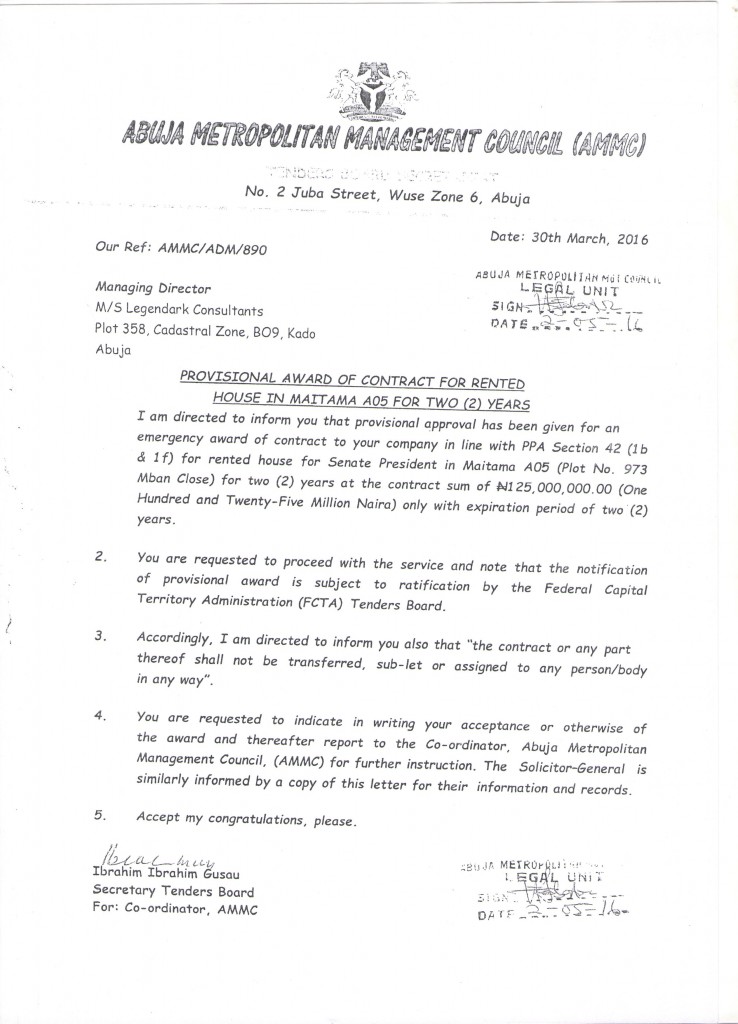 “I am directed to inform you that provisional approval has been given for an emergency of contract to your company in line PPA Section 42 (1b &1f) for rented house for the senate president in Maitama AO5 (Plot No 973 Mban Close) for two years at the contract sum of N125m only with expiration period of two years,” the letter signed by Ibrahim Ibrahim Gusau, secretary tenders board, read.

A series of “offer for property” letters from Legendark was written to the senate committee, and not the FCDA.

Acknowledgement copies of the letters were received and signed by one Samuel Melaye. 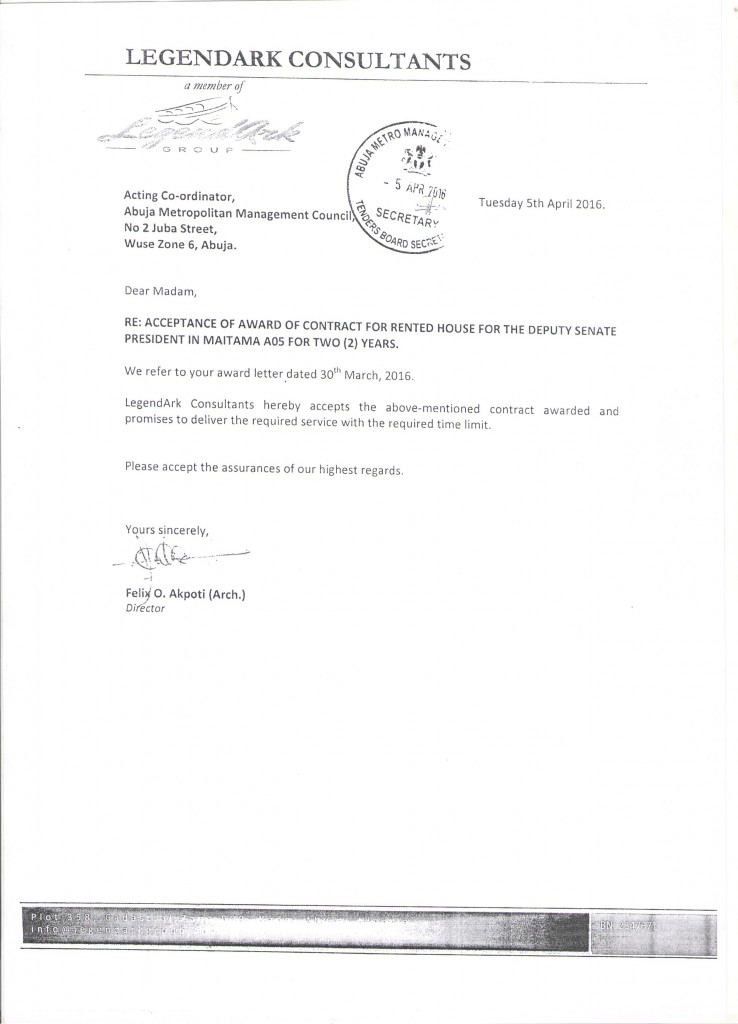 One of the letters signed by Akpoti, entitled ‘Offer for property on Plot 2 Pechora Close, Panama Crescent, Maitama, Abuja’, read: “Sequel to our letter dated 19th January, 2016 to your good office, we are glad to inform you that we have secured a property on the above-named address, that meets your kind request.

“The facilities of the property include: a seven-bedroom duplex with a mezzanine floor, a ballroom, a movie room, a four-bedroom boys’ quarters, a swimming pool (and) internal parking space for 10 cars. 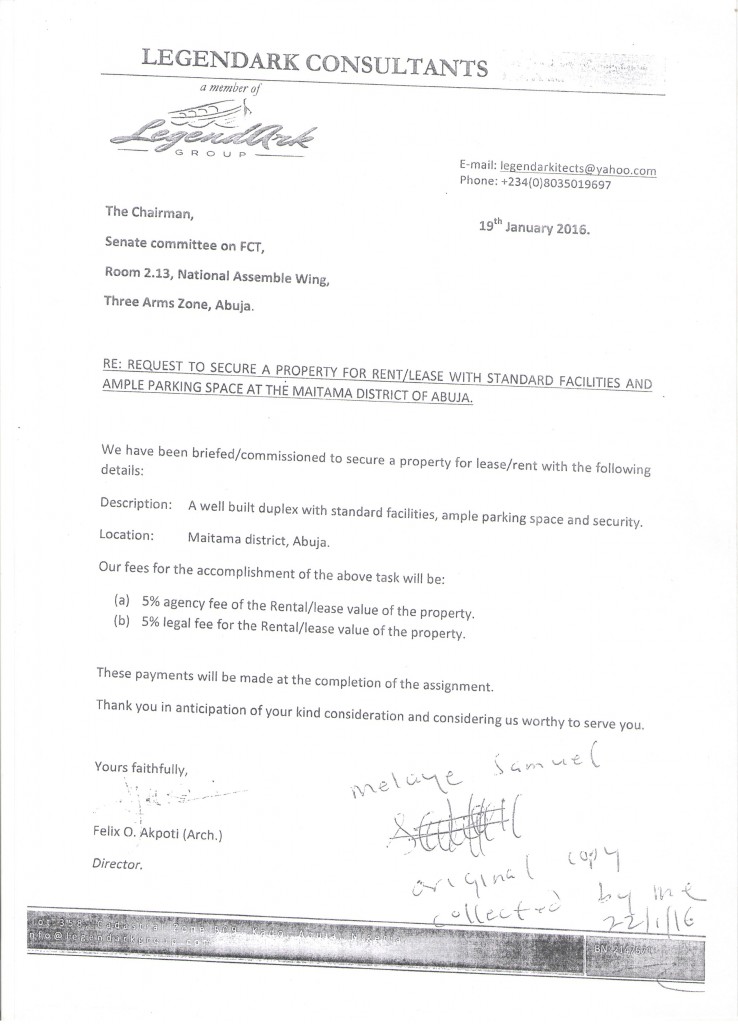 “We hereby offer the property for rent/lease to you at the market/asking price of N45m per annum.”

The Citizens Action to Take Back Nigeria (CATBAN), an advocacy group, had initially alleged that the presiding officers of the national assembly received over N630m from FCDA as rent for “phoney” residences.

Olaniyonu had then dismissed the allegation as false.

He said the four presiding officers of the national assembly had been living in their personal residences, and that “they do not get paid by any federal government agency”.

“There is no truth to the claim by this group. In fact, during the preparation of the budget, the senate president and speaker directed the FCDA to remove the N10bn voted for the construction of their official residences to save cost. The current leadership of the national assembly will not be part of any illegal payment to anybody,” he said.

However, Turaki Hassan, Dogara’s spokesman, said the presiding officers of the national assembly are entitled to official accommodation, “which is provided by the FCDA”, and that how the agency does it is “entirely its business”.