You are here: Home / POLITICS / Showdown! ECOWAS gives Gambian President till noon to hand over power

ECOWAS leaders have given Yahya Jammeh, who lost elections last month, until midday today to hand over power and agree to leave The Gambia or face military action carried out by the regional bloc ECOWAS.

West African troops entered the country to bolster its new President Adama Barrow – who was sworn-in on Thursday – but military operations were suspended a few hours later in favour of a final diplomatic push to convince Jammeh, who has stubbornly refused to quit, to exit peacefully.

“We have suspended operations and given him an ultimatum,” said Marcel Alain de Souza, head of the 15-nation Economic Community of West African States (ECOWAS).

RELATED:   Governor Nasir El-Rufai cautions on the use of social media in reference to Kaduna state

“If by midday he doesn’t agree to leave The Gambia … we really will intervene militarily.”

Final talks were being led by Guinean President Alpha Conde in The Gambia’s capital, Banjul, on Friday morning, according to de Souza.

He said a total of 7,000 troops along with tanks had been mobilised by Senegal and four other nations, which had crossed into the tiny tourist-friendly country on Thursday evening without resistance. Support for the long-ruling leader has been crumbling. The army chief joined ordinary citizens celebrating in the streets on Thursday seven weeks after contested polls.

“Diplomacy is a long road – it always has been and always will be – so every opporutiny to find a resolution is the best means possible for the region,” Robin Sanders, a former US ambassador to ECOWAS, told Al Jazeera.

RELATED:   Bauchi State got a deduction of N400 million from Federal allocation, but see why they are suing

“The last thing that West Africa needs is another conflict.”

While there has been talk that a deal may include amnesty for Jammeh, whose regime has been accused of various human rights abuses, Sanders said this would set a bad precedent.

“Also in this case, I am not in the camp of complete amnesty because what you do is signal additional impunity going forward with other leaders, not only just in the continent but across the world,” she said. 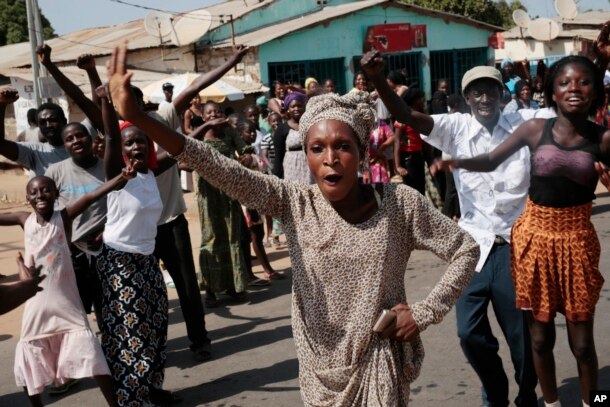 Barrow was sworn in at The Gambia’s embassy in Dakar, in neighbouring Senegal, on Thursday.

Celebrations erupted in Banjul, meanwhile, where tensions have run high over the crisis, especially since the declaration of a state of emergency by Jammeh made on Tuesday.

Barrow, a real-estate agent turned politician, had flown into Senegal on January 15 to seek shelter after weeks of rising tension over Jammeh’s stance.

At least 26,000 people have fled The Gambia for Senegal since the start of the crisis fearing unrest, the UN’s refugee agency UNHCR said on Wednesday, citing Senegalese government figures.